The Italian Job: From Micro to Pro 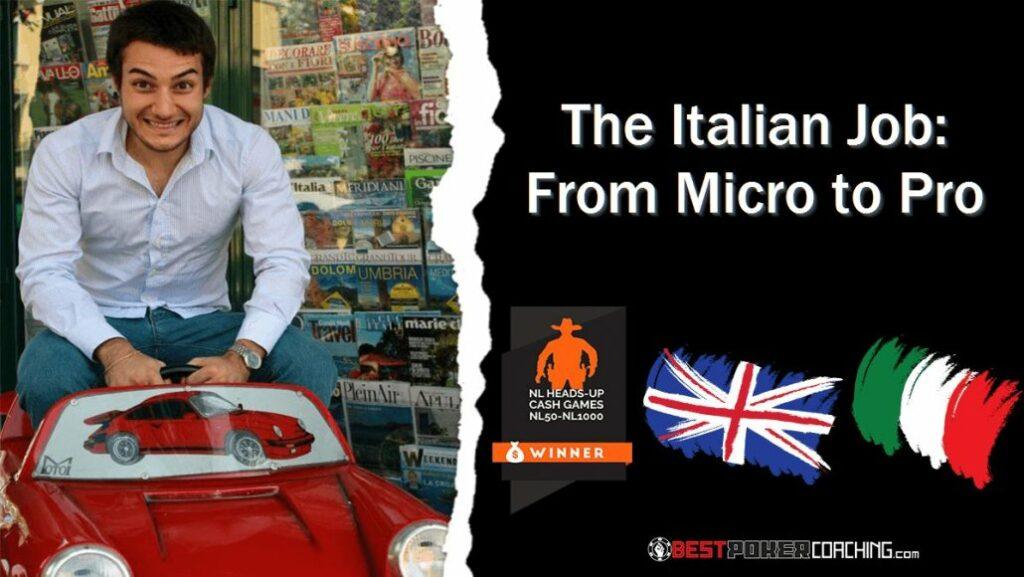 Doing It His Way

Alessandro, “randomwalkin” Riente, ex-pat Italian in London and Heads Up Soldier alumni, finished his Coaching for Profits contract in mid-2018 after riding out the variance for two years, six months and ten days of studying with Best Poker Coaching. In that time he took himself from being a student with a dream of running his own life to his own plan to making just shy of €14k in a month playing heads up No-limit Holdem online.

Alessandro came to poker at the age of nineteen with a deeply seeded suspicion of gambling in general and this particular trendy version of it in particular. “Another stupid game to waste money on, like blackjack or any other casino game online” he thought, but his friends persisted in the way poker degens do and once he understood that: “you’re actually playing against other players, the casino takes only some fees and there were people actually making money out of it, I got interested and started playing and studying the game.”

Fast forward over the next six or seven years, watching him make his first €25 deposit on PokerStars and slowly building a roll, jumping about between the various Texas Holdem specializations: LHE, NLH, PLH in their 2-max, 6-max and full-ring forms (back when that sometimes still meant ten to a table). Not to mention the various tournament formats laid on over the years.

By the time he was 26 he’d decided that heads-up no-limit was the game for him and had begun to hunt around for places to sharpen up his skills in the heads up arena.

“BPC was quite interesting,” he said in an interview. “Because they do make money only if I make money as well, so it must be legit to be sustainable in the long run […] before joining I was making money only from rake back playing mostly 6max but heads up is less boring and I knew I could have made money from the tables. The last thing is that I always had the issue of keeping my A-game during the day, knowing that I need to report my results to someone and reaching a specific goal helps me keeping my motivation high and working towards that goal.”

With a plan in place, he put in an application to BPC’s Coaching For Profit programme, got a slot and set about prepping for his first coaching session. The first day of his contract was in October 2015.

His reasons for coming to BPC were clear:

“My motivation comes from the pursuit of freedom, I’m tired of doing things other people want me to do. I just want to wake up and decide what to do every day for the rest of my life.”

The first few weeks are largely about calibration. Alessandro took in a huge amount of info, was drilling his ability to estimate flop equities, and putting in time at the tables to give his coach a bank of play on which to base their first coaching sessions.

It was an adjustment period for Alessandro. He quickly found himself picking out some of his major leaks, not necessarily in the way he played his cards or chips but within his self.

“I made few mistakes but the thing that pisses me off the most is when I play poorly only because I’m tired,” he wrote. “I start to make a stupid call or raises without thinking and for this reason, I’m gonna try to recognize when I enter in this phase and how to manage it. This is the goal for my next week and because I cannot manage this yet I need to just stand up from all the tables. I’ll keep you updated on this.”

When asked to describe London in an interview Alessandro more or less nailed it down in fourteen words: “What I do not like is the food and the lack of sun.” Now he was plowing through a suddenly increased workload in the dreariest months of the UK’s calendar and trying to fit in his decidedly energetic extra curricula activities like hitting the gym for CrossFit training six or seven days a week and his regular daily responsibilities.

The result was to be expected: burnout.

After an impressive first few months in which he turned a profit at the table, ramped up his game, and took his new skills out into the world, the weight of what he was up to began to catch up with him. 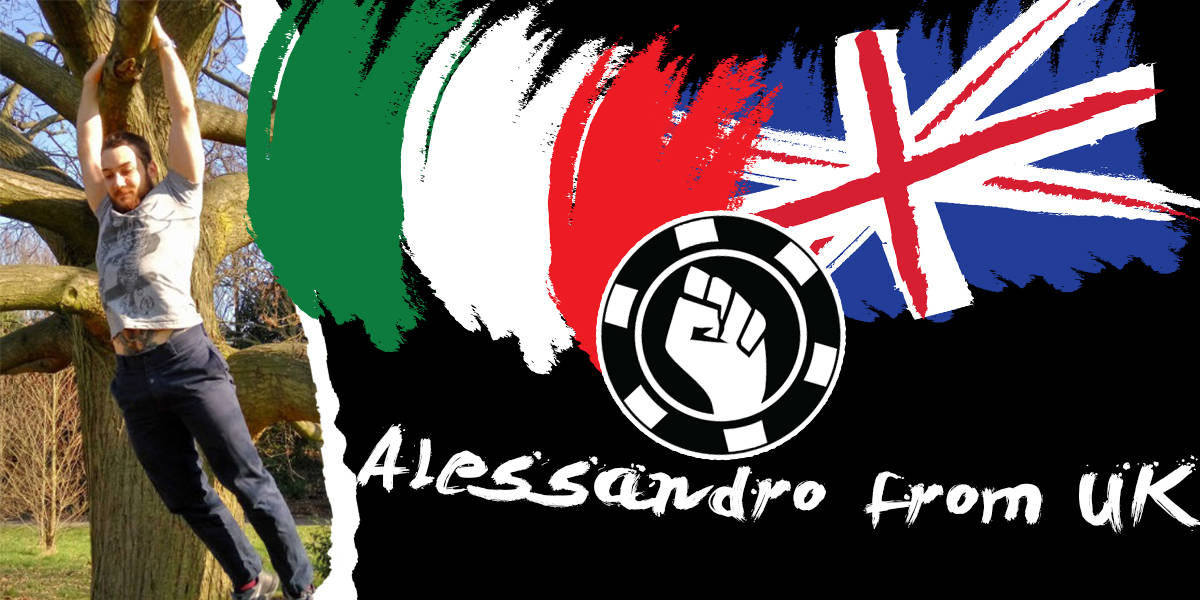 In April 2016, he wrote: “The last 2 months have been a kind of nightmare, it looked like I can’t win anymore and I finished May in break even and April is in the negative (first negative month since I started CFP).”

For him, it was a call to recalibrate, dig deep, and push on. “I think these moments are really gold for our path to success,” he added.  “It’s easy to be happy once everything is going towards your goal but only when things start to fall apart you can recognize the real champions! It is just a question of attitude, the concept is easy, its application is not simple.”

So he consulted with his inner Yoda and outer coaches and decided to lay out a few goals for his play in the next month. These were to help focus his scattered attention on getting his poker game back on track.

“I need to watch at least 27 poker videos (1 per day on average). For the first part of the session I will play only up to NL100 and once I’m +200 up I can start adding NL200 tables (I will review this in one week). Comment at least 135 hands (5 a day). Stand up if my oppo doesn’t limp in the first 15 hands, NO MATTER WHAT! Even if he’s marked as “no limp fish”. Writing this post will help myself being accountable, I’ll keep you updated.”

A Gap Of Time

“Now take upon me, in the name of Time / to use my wings. Impute it not a crime / To me or my swift passage, that I slide / O’er sixteen years and leave the growth untried / Of that wide gap,” says Time in the middle of The Winter’s Tale. Give me the same benefit of the doubt.

The span between Alessandro’s crisis and his victory is somewhat shorter about two years. He continued to work on his game and fulfill the goals he set himself. Backsliding some weeks but always taking two steps forward for each one back.

He found his balance continuing in full-time employment in London.

“I do [still] play Crossfit and lift weight about 5/6 days a week,” he said in his post-contract interview. “I read a good amount of books to continue developing my knowledge and in the last period I started to get interested in meditation as well.”

By May 2018, he was a regular crushing the NL1k heads-up tables. Despite being a low volume month for Alessandro, May brought him not only his final payment on the BPC contract but an insane run of good luck.

“I am satisfied with my game overall,” he said in the wake of it. “Apart from a few days in which I played terribly I didn’t have any huge positive day, but I manage to have many consecutive big winnings which overall made a big result for the month of May.”

The final tally on 1st June was a monthly profit of €13,874. Not only Alessandro’s best month ever but the best result of any BPC student that month. 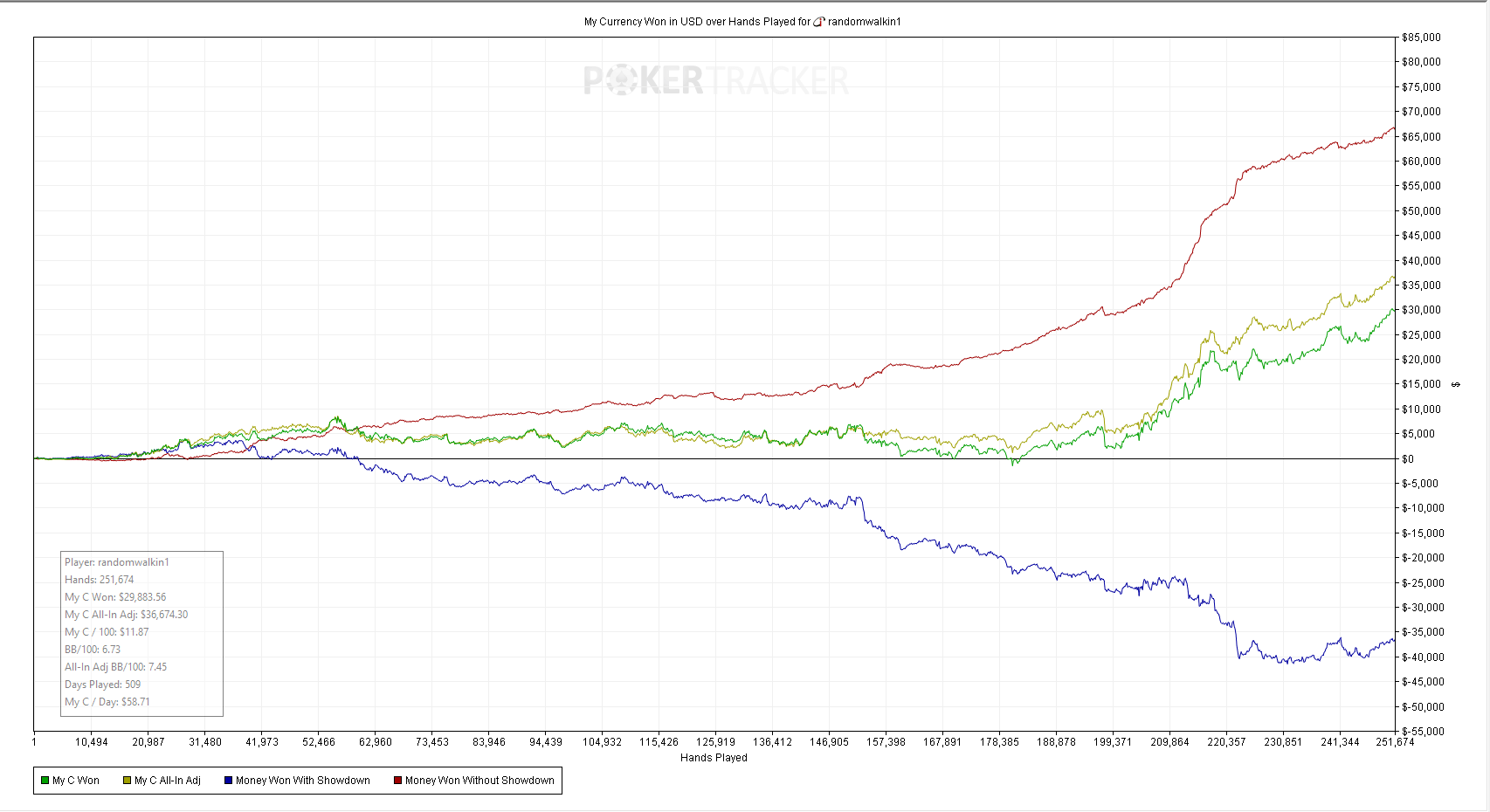 He once said, “once you are taking your time to make a decision, rewind the entire hand from the beginning and try to understand what makes sense and what doesn’t. It will help to better read the situation.”

For him, the last two years and six months had been one long poker hand. When asked to rewind back on it his final words on the subject were: “Do what the coaches tell you to do. I know sometimes it could look like it doesn’t make sense, but it doesn’t matter. Your focus should be on doing the right thing and BPC has got the experience for that […] Thanks for everything, I’m a better person now.”