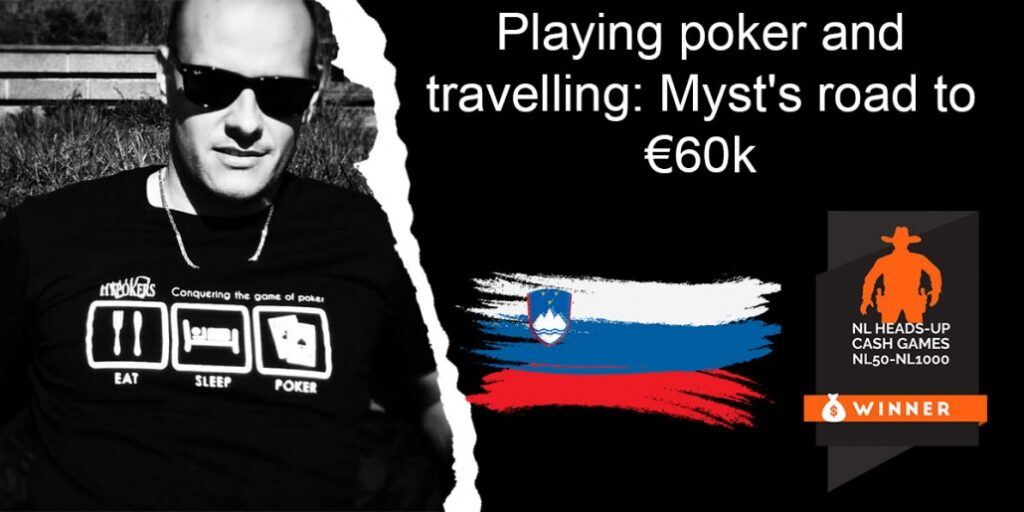 Jarnej “Myst” started playing poker a long time ago, over 10 years now. At first, he was playing with his friends and he got hooked for the game.

Soon he was learning poker strategy and becoming a “play money millionaire baller” -his own words- on Poker Stars. With all the play money coming easily his way, he thought he was the best poker player in the world and deposited some money to get a feeling on how it is to play for real money. His “career” stopped really quick,  when he lost half of his bankroll in 20 minutes.

Not too long after the first unsuccessful experience, he started playing in one site that provides freerolls. He was ITM in 2 of this freerolls to add $250 to his bankroll, that put him back into action.

That got him to try to learn the game again, he joined an online poker school in his town and started playing NL fixed limit in a local casino. His adventures playing live didn’t last long, after some time, the police stormed into the place like in the movies and close all the games there.

This time Jernej didn’t took a break like the first time he had a set back in poker. He discovered a new trick to win some extra money, he’d jump from site to site to clear out the welcome bonus they offer. The game level he was at the moment was good enough to be a breakeven player in NL100, so he would clear out the bonus very fast.

With the money he won clearing the bonuses, he managed to start doing something that he really loves, travel. He went to Thailand to a Muay Thai training trip. After the trip, he took a break from poker.

If you started playing poker in the last 6 or 7 years, you probably heard about but you weren’t affected by the Black Friday. Jernej wasn’t so lucky, all his money was on Full Tilt, so his bankroll got stuck on the site.

When Poker Stars bought Full Tilt and paid back all the players, Jernei got his bankroll back and started playing again, just to figure out the strategy he was using before was not good anymore to beat the same stakes he was playing before. He always wanted to learn how to play cash games, that was when he decided he needed help and joined the NLHU Soldier program.

When you join a Coaching for Profits program you expect the results to grow in a steady way or to grow exponentially as you move up in stakes culminating in you finishing the program. In Jernej’s case, if you take a look at his graph, it looks like it was a steady journey until finishing, but if you look closely, there were several breakeven stretches and soon you’ll understand why this happened.

The first hands Jernej played on a HU table was at the smallest stake possible in online poker, NL2. He was playing there mainly to get used to all the new things he was learning. Didn’t take long for him to start playing NL50. Right in the first day playing this stake, his results were bad. His expectations were too high, and losing on the first day pushed him down. He ended up reading the blog of 2 other finishes just to see that losing at the beginning is extremally normal.

So he dropped NL50 and starter playing NL10 and NL25. In the next months, he had decent progress in the hours played and consequentially in the profits until he made a decision that would take him from the right path.

As mentioned earlier, Jarnej has a big passion, to travel. If you take a look at his blog and read the whole thing, you’ll see that it is almost like a travelling blog. So when the former student and now coach Maestro said he was going to live in Thailand and asked who wanted to join him, Jearnej didn’t think too long and booked the tickets.

In the following months after he arrived in Thailand, his hours decreased as he was very distracted with all the cool things you can do in that beautiful country. And when your hours decreases, your profits and progress follow the same path.

It was a cool 5 to 6 months experience in Thailand. When he returned to his home country, Slovenia, he was decided to take poker seriously again.

For the next 5 months, he was completely focused on poker. He was posting hands daily, participating in the coaching sessions, studying and playing a lot. With all that effort, the results started looking good and he earned close to €20.000 at the tables during this period.

The thing about having a passion is that you miss it very badly when you don’t do it for a long time. Even with all the grinding, studying and decent results, Jernej was bored, so he bought a one-way ticket to Thailand to start living there again. At first, he was alone and later another student in the NLHU program joined him.

Unlike the first time, this time Jernej wasn’t as distracted as before and he managed to put decent hours at the tables in the first 2 months. But the results were not following his work at the tables and he lost money in both months.

In the next 5 months, he managed to win the money back and a little bit more. He only managed to get a really nice month after he came back to Slovenia again.  But not before visiting countries like Bali, Australian, Singapore, Vietnam, Malta, and Italy.

If you’re wondering how long it has passed with all this playing and moving around countries, it was close to 2 years. It would still take him one more year to finally reach the €60.000 target and finish his contract. And if you think something different in this period happened, it didn’t. In fact, it happened the same thing as the second time. He had some good results playing in Slovenia and then decided to move to Thailand for the third time.

After finishing the program and looking back on how it was the whole journey, Jernej knew that he could have done things in a different way to get faster results:

“My biggest mistake was not being consistent and only do poker for a while. I went travelling, lost focus, had to relearn a lot of things that I forgot when I took a longer vacation. A lot of times there was twice almost like half a year I took off or really casually playing (more in the beginning and middle of the journey).  It was only last year that I really mastered and had the discipline for travelling and working at the same time, also I build up consistency.

With travelling, I also used a lot of money and it really hurt me to have a smaller bankroll and not play bigger limits. Should have really tried to avoid this. When I was doing an analysis of my hands I played 85-90% of my volume in limits up to NL200, so I basically finished the contract on those limits.  I played just a few hands on NL400 and almost nothing on NL600. That happened partly because I was table selecting too hard on these limits but mostly it was because I diminished my bankroll travelling. Definitely doing better now in this regard.  Now I’m basically trying to build up my bankroll and play as high as possible even if it means you get owned a few times. Of course, I’ll still select opponents smartly, but you have to try it out, it’s part of learning. You need to play those limits to get big scores in a month and finish the program fast. It’s like Jan “somebody” says: There is no funny business until you get the bankroll to play NL1000!”

Now that you got used to travelling and playing at the same time, we look forward to those 5 figure months Jernej! Congratulations for finishing the €60k contract!

PrevPreviousThe Italian Job: From Micro to Pro
NextDrago’s case study: Hard working your way to €60.000Next