The luckiest hand in poker or the “Doyle Brunson hand” 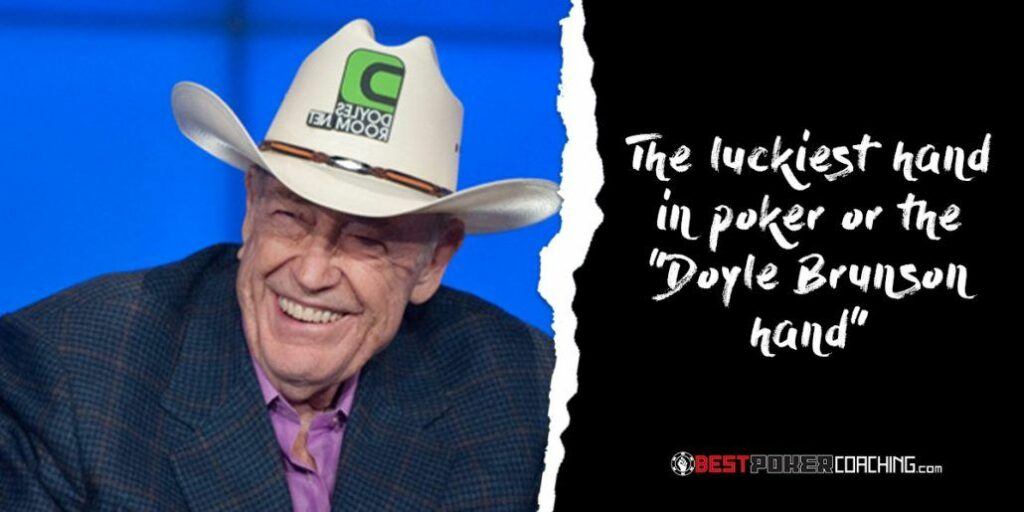 Many hands in poker have special names: Pocket aces are called pocket rockets, pocket kings are the cowboys and the famous “dead man’s hand” is made of aces and eights in cross and spades.

But there are not many hands named after a player in the world of poker. 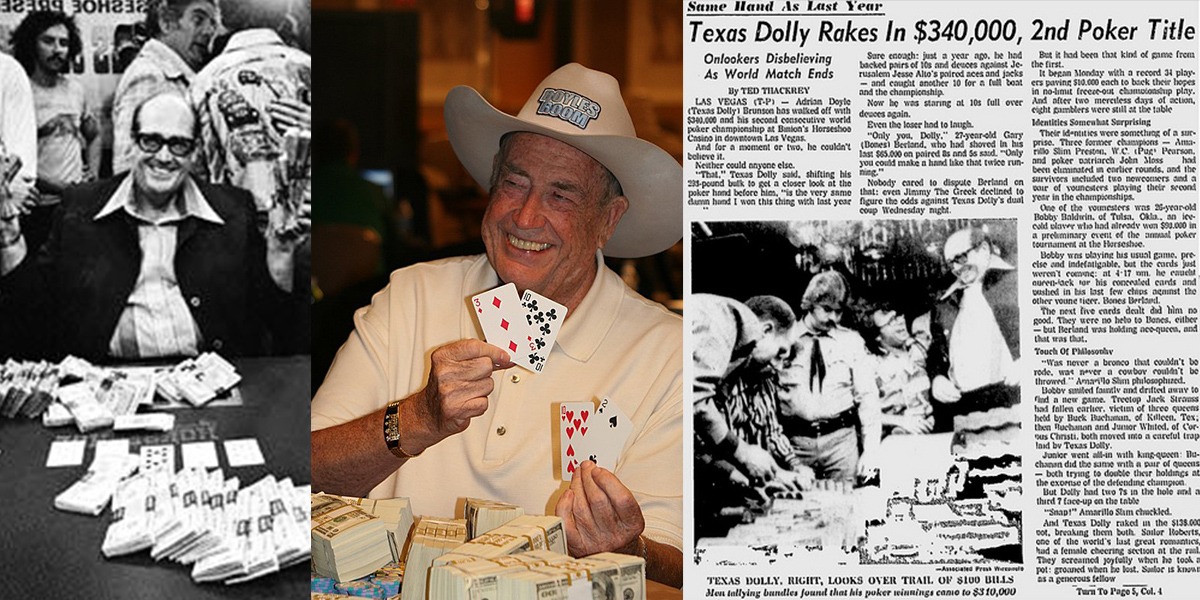 Maybe you have heard of the “Doyle Brunson hand” before,  maybe someone turned over 10-2 in a friendly game, smiled and everyone around you nodded knowingly. Or you watched the WSOP and someone played the 10-2 and the commentators started talking about Doyle Brunson although he was not even at the table. That’s because the 10-2 and Doyle Brunson will be linked together for eternity.

But how did a holding that can be considered a “trash-hand” get named after one of the most famous poker players who ever lived?

Well, because this hand added much to the fame of Doyle Brunson and made him a World Series of Poker Main Even winner. Twice. In consecutive years.

Doyle Brunson is a living legend in poker, and who better to start a little series about famous hands in poker than the “grandfather of poker” with his long and illustrious career.

Doyle Brunson has won 10 bracelets so far which places him only behind Phil Helmuth, who is leading the all-time leaderboard with 14 bracelets. In addition he is one of only 4 players who won a World Series of Poker tournament in four consecutive years and he is also the first of six players to win both the WSOP Main Event and a World Poker Tour title

With this kind of success, it’s no wonder that Doyle Brunson was introduced into the Poker Hall of Fame in the year 1988 and is considered one of the all-time great.

But how could such a brilliant poker player end up with a hand like 10-2 named after him? Because it has been the luckiest hand among his long, illustrious career.

The “Doyle Brunson hand” made its first appearance in the World Series of Poker in 1976, where Doyle Brunson and Jesse Alto were the last two players remaining at the final table. 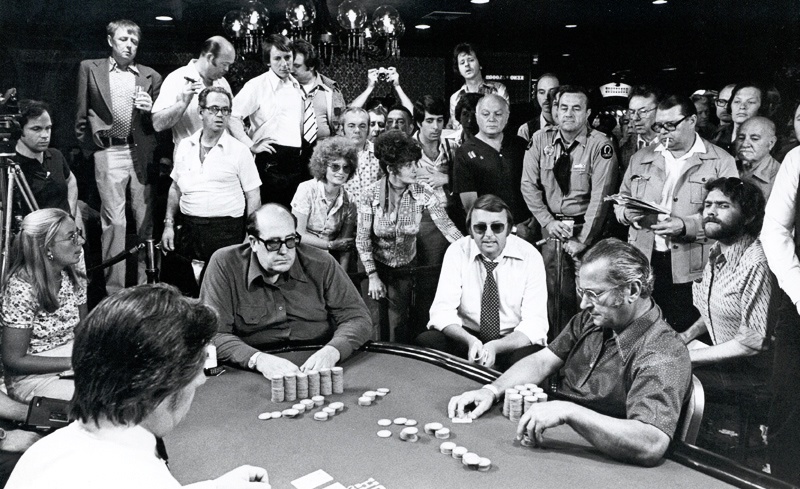 His opponent Jesse Alto was an amateur poker player who was working as a car dealer in his daytime job, but made it to the final table of the World Series of Poker nonetheless.

Doyle Brunson, being the professional, was sure he had an edge over his opponent and was looking to exploit this edge ruthlessly. Brunson was also the massive chip leader at this moment while Jesse Alto was trying to recover.

At one time Jesse Alto was looking at Ace Jack offsuit, a strong holding for heads up play and made a substantial bet pre flop. Doyle Brunson looked down at his cards and decided it is a good idea to call this bet with 10-2 suited. The chip lead and the reputation of Alto as an amateur may have played a role in this play, but only Doyle knows.

The flop came up as A-J-10 and Jesse Alto could not believe his luck when Brunson announced the shove. Holding bottom pair but having a massive chip lead, pressuring his opponent was one of the few veritable options Doyle had, but calling was mandatory for Alto with top two pair.

Alto was surely already celebrating a bit in his head but what followed was one of the worst bad beats ever suffered in the World Series of Poker Main Event history.

The Turn brought another 2 and Brunson made it two pair but was still trailing behind his opponent. But only until the River came up with another 10, completing the full house for Doyle Brunson!

As the chip leader Brunson took down Jesse Alto with this hand and won his first World Series of Poker Main Event.

The chances of beating the top two-pair of Alto on the Flop were slim and you could imagine the chances of Doyle Brunson winning another Main Event with the exact same hand just one year later.

The Main Event of the eight World Series of Poker in 1977 was coming to an end and Doyle Brunson was once again one of the last two players remaining.

Like the year before, Doyle Brunson was the chip leader heading into the last hand of the tournament, but this time his opponent Gary “Bones” Berland was also a professional poker player.

Doyle Brunson looked down at his cards and found the already notorious 10-2, this time not even suited. However Gary “Bones” Berland was looking down at the even more woeful 8-5 offsuit so both players did not make a huge move preflop. It was the flop that would make this hand interesting for both players.

The flop came 10-8-5, giving Brunson top pair but Berland was leading with his two pair going to the Turn. Interestingly enough both players decided to slowplay their hands with Berland betting small on the flop while Brunson just called with top pair.

Yet again the poker gods were favoring Brunson with another 2 on the turn, providing the defending champion with top two pair. Brunson had enough of slowplaying his hand and bet large much to the joy of Berland who pushed all his chips into the middle quickly.

This time round Doyle Brunson was ahead at the time of the shove but on the River the poker gods added insult to injury, giving Brunson the full house with another 10.

The defending champion did not only win the most important poker tournament in two consecutive years he did it both times with 10-2 and a full house at the river!

This news made it to the big news and the “Doyle Brunson” hand was born. Although this hand never had similar success in the World Series of Poker again (and it rightfully should not!) the 10-2 makes a periodically appearance at the big poker tournaments and televised cash games, even more so if Doyle himself is present at the table. The young and the old might try to impress the grandfather of poker by playing the 10-2 and turning it over after winning the pot, exchanging a smile with the legend.

After winning the World Series of Poker twice with the pitifully 10-2, Doyle Brunson himself is known to play the “Doyle Brunson hand” on many opportunities and who could blame him? If he picks up this hand on television the attention of the commentators is assure and if he decides to play it the hand will almost always make the final cut of the show. 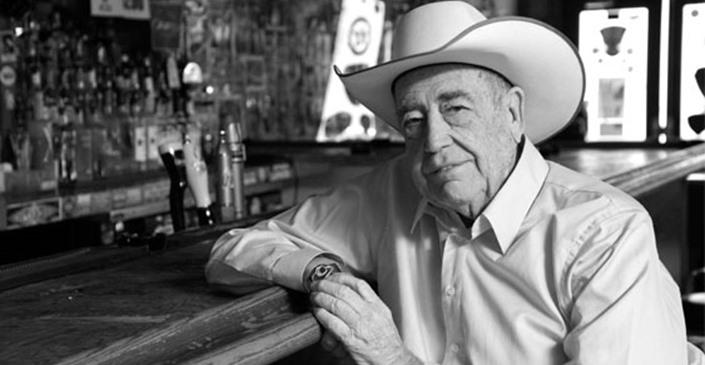 In 2005 Doyle Brunson made it to the big news again, with a very similar holding.

Ly simply called the BB and Brunson pressured the shorter stack with an all-in. Ly called willingly with his KQ, but Brunson caught the 3 on the flop and the pair did hold up until the river.

Even a poker legend like Doyle Brunson might get in trouble playing a “trash” hand like 10-2 and sometimes Doyle seems to have a hard time letting go his favorite hand. However he always cracks up the table when he shows his 10-2 and even his opponents can’t help but to smile when beaten by the “luckiest hand in poker”

Just ask Zimmerman at the World Series of Poker 2003

PrevPreviousA Second Poker Boom: The Rise of India and China Online
NextFifteen Years Since Moneymaker Kicked Off the Poker BoomNext