Leandro – My story on the road to 30k Euro 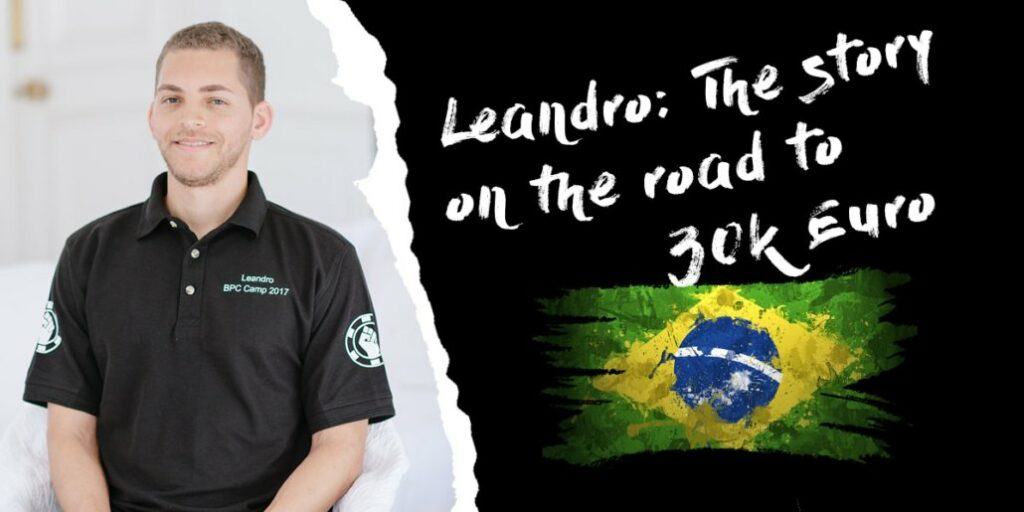 I joined the CFP NL 6-max Crusher program as a NL50 winning player in a big downswing and I’m finishing the program now as a NL50 winner. When I put things this way, it might look like it was a worthless journey, but it certainly wasn’t.

When I joined it was everything very weird for me, as an introvert, being forced to create a blog, participate in the sessions and talk to people was a huge step. I remember writing my first post and not submitting it for more than 3 hours because I was afraid of what people were going to think. The first time I “talked” to Gordon it was in a group QnA session via Skype, when Gordon asked me a question I pretended my mic wasn’t working because I was afraid of speaking. It is so funny when I remember this.

Back in the day, we needed to submit videos for the topics in Crusher program that was under construction. Of course, I was delaying recording the first one video, if you’re a smart person and read what I wrote so far, you know the reason. So I sent the first one and it was ok, then I sent the second one and it was not very good, so Gordon said it was shit, made me record the video again and told me I could only submit a video again after I played 10k hands.

So I did what all the students should do when your coach tells you to do something. I played 10k hands in one day and submitted a new video. I could be shy, but I wasn’t going to be a lazy cunt!

I was actually a lazy cunt before joining CFP, I played poker professionally for 9 years and the maximum amount of hours I put in one month was 100hs. I have no idea how I made a living out of it.

All the success stories I read and Gordon constantly pushing me and the other students inspired me to play more, but not all that much to be honest, I was still playing only 160hs while I should be playing 200hs+, like every pro should.

I was progressing, but it was still very slow, mainly because I was playing poker professionally and needed to request cashouts for myself every month, which prevented me to build up the bankroll faster.

That definitely made my journey difficult and in the hard times, I always sent some crying emails to Gordon, lol. I’m very thankful he was always patient and offered good solutions for the problems I was facing.

At some point in 2016, July I think, I was in a downswing and after some stop losses I stopped playing but still wanted to be active, so I started answering hands from the Micro students in the forums. I enjoyed doing that very much and I knew some students were coaching inside BPC, so why couldn’t I do it as well?

I emailed Gordon about it and he proposed to create the CFP Brazil program, which I happily agreed to do it. So after just a few days I started having some test coaching sessions with the students in the Micro program, which made me extremely nervous and anxious, I remember in the first 5-10 sessions to pace around the house for around 1h before each session to start.

With time I got used to it and it became normal to me and it is still something I enjoy doing very much till this day.

One thing that BPC is known for doing is to hire some students to start working in BPC team, nothing better to have guys that already know the program to work for you, right?

At the end of 2016, Gordon offered me a position in BPC and I was super excited to take it.

If you read my first post in my blog, you’ll see that my end goal in the program was to retire from poker, because it was something that I’ve been doing for a really long time. Getting a different job was a nice step in that direction.

But that meant that poker would need to be on hold for a while because of all the new things I had to do.

I didn’t play a hand more almost a year with all the working for BPC. The thought of start playing again came after the Poker Camp in Cannes last year.

Sort of coming back

Seeing all the guys that finished the program in Cannes, especially Danel and Lateralus (we joined the program only a few months apart), motivated me to go back at the tables.

I didn’t mention above that working for BPC is demanding, right? Well if you’re here I assume you’d assume that, but yes, it is very demanding and takes a lot of time.

So in order the play some poker I was sleeping only 5hs per day. That with the work and going to the gym made me put the game in hold again after 2 months. I was pretty much half awake all the time because of sleep deprivation. That is just not a good way of living.

New ideas and coming back for good

After the Poker Camp in Cannes, I was given a new job inside BPC. Gordon made the VIP Coach for all the programs. My job was/is to talk to the students, help them with anything that they might need, do Welcome to CFP sessions, check-up sessions and so on.

Those sessions with the students were always very interesting and productive, hopefully for the students, but it was productive for me as well, because you get to know new people, see what kind of things they do, good and bad, you can filter out the bad and use the good for yourself.

In one of these sessions, I was talking to one student and he told me about one thing called polyphasic sleeping. He explained to me how it works and told me he was thinking about implementing himself.

This polyphasic sleep thing stayed in the back of my head for a long time. I didn’t play poker for around 5 months, I knew that I need to do something completely different in order to be able to do everything that I need to do in an efficient way (Work, gym, and poker).

In February this year I was on vacation on Peru, but my girlfriend was working so I had a lot of free time, so I did a really long research about this crazy stuff that looked like it would kill me.

To not bore you with details about it, one month later I started implementing the polyphasic sleeping and started hitting the tables again. And it worked like a charm! I’m playing poker pretty much every single day now, even though not many hours due to a busy schedule with BPC work. But I’m happy about it. And now I finally finished my contract!

My interview from Cannes 2017:

All students that finish a CFP program have their lives changed in one way or another, mostly on poker, in my case was not only poker.

When I joined I was a scared, shy dumbass that had a phobia of talking to new people. Now I talk to new people on a daily basis and I have absolutely no problem with that.

I learned poker in a way that whatever new strategy I learn from now on, I know it’ll not be as difficult to implement and learn as it was before I joined.