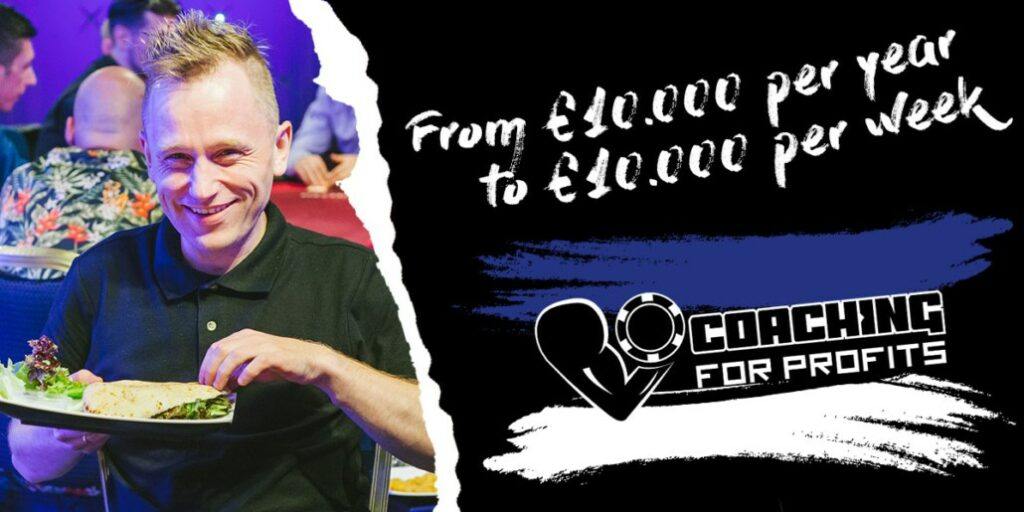 Lauri lives in Tartu, Estonia with his family which is “a great place to raise your kids and practice sports (running, skiing, rollerblading, soccer etc).”

All of the incredible story you’re about to read is documented in his blog here at Best Poker Coaching.

Lauri first heard about poker back in 2007, when a friend asked him to move money from him to another guy. When his friend mentioned that the transaction was for Poker, he thought his friend had become some sort of a gambler.

After hearing about poker for the first time, Lauri wasn’t interested at all. His friend ended up mentioning poker to him again a couple of months later and since he was bored and had nothing to do, he created an account and started playing with “Play Money”. Everything seemed super easy so he deposited $20 in a poker site. But he was a fish at that time and ended up losing everything.

In his second $20 deposit, he decided to take it more seriously and started learning the game. That was when his bankroll starter to grow.

Right in the first year, he turned that $20 into $3.500. In 2008 he won $10.000 at the tables and in 2009 he was stressed out with his job so he made some arrangements with his boss so he could work from his home half time and become a half-time professional poker player.

In the 13th of February of 2009, Lauri was incredibly lucky to win $41.7k in one of the biggest Bad Beat Jackpots in the history while playing in a room from the Merge network.

You can watch the Bad Beat Jackpot in the video below:

After winning all that money, he completely lost motivation on his work, that was the time where he became a full-time poker professional.

First, he was playing regular cash game tables with 6 and 9 players. After buying Gordon’s HU Mastermind course, he started to play Heads-Up.

He was not making a crazy amount of money, but he was making enough to live well out of it. He could have won more, but he didn’t, mainly because he was, in his own words, a lazy person.

It is well known among all poker professionals that if you don’t put enough hours on the tables, the variance will catch you. (Sounds like a horror story! And it actually is for some players.)

Lauri’s worst downswing started 1,5 years prior to joining Coaching for Profits. He used to have 8,1bb/100 winrate, but after the downswing, his winrate dropped to 3,4bb/100.

He had only one more shot to make it in poker. That was the time he decided to join BestPokerCoaching’s Coaching for Profits Program.

LAURI AS A COACHING FOR PROFITS STUDENT

Why Lauri joined Coaching for Profits?

“I want to join CFP because I actually like my lifestyle and I don’t want to work for someone else. I like that I can go running anytime I want, I like to be there for my family and see my son grow every day, I like to be my own boss and I love the financial freedom poker gives me (though not recently) and that’s why I want to join CFP and let Gordon (founder of BPC) make me rich!”

There is only one “but” in this story. Despite having years of experience playing NL Heads-Up, Lauri lost faith in this poker format and thought the games were dead. So instead of becoming an NL Heads-Up Student, he became a NL-6max student.

The problem to make a sudden transition from Heads-up to 6-max is that if you don’t adjust to the game correctly, you just start stacking off way lighter than you should. This may or may not be the reason Lauri struggled really hard at the 6-max tables. His results there were disastrous. In 44k hands, he managed to lose 55 buy-ins playing NL30, NL20 and NL10.

At that point, he started exchanging emails with Janez (at that time COO of BPC) and later with Gordon. After hearing about Lauri’s previous experience playing Heads-Up, Gordon was chocked Lauri choose the 6-max program, he said: “You are CRAZY for not playing Heads-Up if you have 5 years of experience in it.”

That was the time Lauri was offered to switch from the 6-max course to Heads-up.

Switching programs made Lauri’s results change almost overnight, showing that it was a really bad decision to join Coaching for Profits in the 6-max program. So it took a couple of months, but now he was on the correct path to achieve great things!

Not long after… “Yesterday I doubled my so far best day in the program and it was probably the best day in my poker career as well. I managed to win 16 buy-ins at the tables! (€1183)”

(You should probably remember about €10.000 and Lauri for later in this article!)

Best Poker Coaching had a Poker Camp in Malta in 2016, Lauri went there with his family seeking a nice vacation and to take a little break from poker. “Malta was exactly what I needed: a good vacation and very useful and inspirational Poker Camp. Before the camp, I had lost my focus, but I got so much motivation and tips, that everything will change now. I will do everything to finish Coaching for Profits as soon as possible (this year hopefully).”

In the poker tournament in Malta, Lauri received the trophy for the “donkiest” moves at the tables. But he was about to show everyone that he was not a donk at all!

He wasn’t joking around when he said he’d do everything to finish the program as soon as possible. He worked really hard and three months after the Poker Camp, at the end of the month:  “What a day I just had. Started my day hoping to stay in the Red Belt (Note: Heads-Up program used to separate students in belts based on their best month in profits) and at some point discovered that I have the chance to go for the Black Belt and the magical €10.000 month. So I did it! After playing for 13 hours and hitting my new record day: €2896.”

“Thanks guys and special thanks to you Nubson, our coaching session before Malta was eye-opener opener for me.

Thanks to Gordon for making this program and giving a really great inspiration in Malta.

And the greatest thanks goes to Ivan (M1ndCrtl), because he has influenced me the most: at first, in Starter group coaching sessions, then with the mindset coaching which helped me set my life plans and now he suggested to play more aggressive guys and that led me to my first €10.000 month!!! Thank you again!”

Fun fact: Lauri won more in November than he did the entire year before joining Coaching for Profits, which was his worse year playing poker.

“Last week was craziest and of course the best I have had poker-wise.”

In our Coaching for Profits programs, we always keep track of big achievements, like the fastest finisher, record days and record months. The record month for the Heads-Up program belonged to the student “Goodfake”. He won €14352 in his last month in the program.

“Hello! Short update. I just ended my month with €14420 in profits and got the Coaching for Profits Heads-Up record month in my name!”

With all those good results, it was just a matter of time for him to finish his Coaching for Profits contract. Funny thing is that he even opened a contest on his blog, so people could guess which day he would finish.

“I’m opening a prediction contest about my CFP end day.

It will be open until I’m 90% done with my contract (€6K to go).The winner is who will pick the closest date. If two people are equally close, the winner is whoever wrote here earlier.

The prize is one of those Estonian liqueurs (40%, 45% or 50%) by winners choice and will be handed over in next BPC Poker Camp (or somewhere else, if possible).”

He also decided to give a little back to the community that helped him so much:

“I liked that Darwin “Hucol” (Another €60k Heads-Up Coaching for Profits finisher) gave some coaching before finishing his program. I think it is a great way to give something back and I want to continue this thing (and maybe we can make it a tradition out of it).”

Whoever predicted he would finish the program on January 12th, got himself a nice Estonian liquor, because that was the day Lauri finished his €60.000 Coaching for Profits contract!

He received a lot of help during his journey, so he had a lot of people to thank:

“I want to thank again Gordon for making this program and for BPC Poker Camp in Malta. It changed my life.

Thank you Ivan (M1ndCtrl) for guiding me through the program from starter sessions to fight against aggressive opponents, and also the mindset coaching which was also a life changer.

Thank you, Daniel (JurassicDaniel), for helping me when I was struggling (in June and July) and listening to all my stupid questions and helping me to go into the opponent’s head and to try to put him in the range and according to that make thin value bets or bluffs.

Thank you, Maciej (Nubson) for helping realize how to fight in limped pots and how to BOP. It changed my game a lot.

Thank you, Jan (Somebody) for pushing us all to put in hours and helping me realize relative hand strength.

Thank you, my wife, for supporting me all the way through, without your support I couldn’t have done it.”

LAURI AFTER COACHING FOR PROFITS

After finishing his contract, Lauri continued crushing at the tables. In the following 4 months, he didn’t win €10k+ in only one of them.

It was right around that time when he got asked to join the BestPokerCoaching team to coach the students in the Heads-Up program. And this gave him some good luck, because not very long after accepting the offer, Lauri broke his personal record day, and won €8.7k at the tables.

Recently, we had a Poker Camp in Cannes. Lauri had already met most of the community in the event last year, but this was also special because he received his award for finishing his Coaching for Profits contract and he also got a present for his birthday.

He also had some presents to give:

I’ll say again, good things always come close to each other for Lauri. One week after the event in Cannes, Lauri’s daughter was born! Now he has two beautiful kids to take care of!