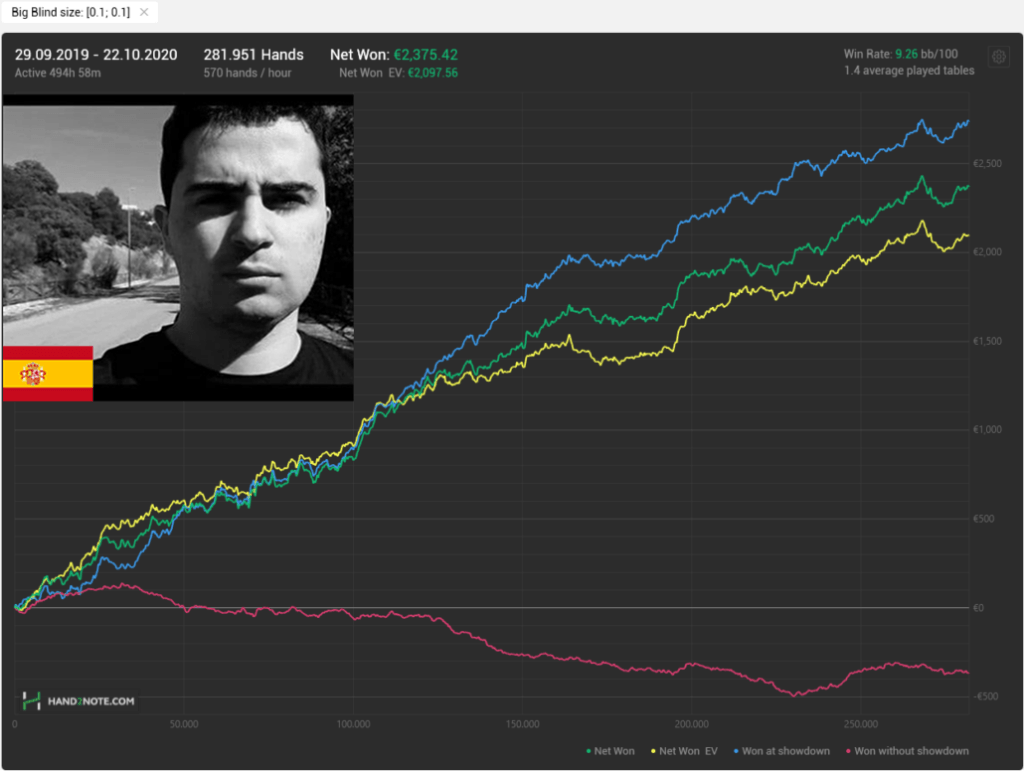 This weekend, VIP coach and mentor Jake made a video interview with our recent Coaching For Profits finisher, Jorge.  Watch the video below, or read the written version to find out more about Jorge and how he went from a losing NL10 player to over €10k profits in March of 2021 crushing everything up to NL400.

1. Hi Jorge, where are you from? Can you tell us a bit about yourself?

I’m from Madrid, Spain and I am 22 years old. I am preparing to move to Malta. Currently, I am a professional poker player, playing mainly on BPC-recommended Apps.

2. What sort of work and educational background do you have? Do you think any of it has played a part in succeeding in your poker career thus far?

I have studied online marketing and classical guitar. I believe both have played a big part in my journey, in the sense that they’ve taught me the will to never give up no matter what, the strong confidence to always fight the next day.
it is something that is rather hard to build, not everyone can have this. I am proud to have these things and they have certainly helped. This is how I eventually managed to never give up.

Before I joined BPC I was the type of guy who always gave up on the first problem and stop trying.

3. Do you enjoy any activities outside of poker? I’m sure the grind has taken up quite a bit of your time.

Mainly guitar and poker. I used to create online marketing campaigns but I don’t do that anymore simply because I don’t have enough time.

Playing guitar and playing poker are the two main things I do, except the obvious things like hanging out with friends and family.

4. What initially got you to start playing poker, specifically 6-max NLHE, and to start a contract with BPC?

This one is a little longer. I got my first touch around 2010 when I saw my father watching some old school high-stakes poker video and I asked him what is that. He then taught me the game and started liking it pretty fast.
I was already good at other card and board games (like chess, some Spanish board games, etc.) but I liked poker more than everything else because in Hold’em every action you take is a bet or a raise compared to other games where you draw a card, or show a card to a player that is not very fun and engaging. Poker had this adrenaline side that got me hooked.

I learned the game really fast and I started playing with my friends at home and in school when I was around 13. We were all pretty bad back then.

The variant that I enjoyed the most at first was tournaments and I started playing online with play money. However, I couldn’t do it for too many hours because I lived with my parents and they didn’t like the idea. They said it’s bad, it’s not moral.

I realized that I couldn’t play tournaments because whenever they came into my room I had to quit and lose the tournament. So that’s how I started playing 6-max games.

After that, when I turned 18, I started playing for real money, and I beat myself NL2 and NL5. Moved to NL10 but I couldn’t win at this level and realized that if I want to make it I have to swallow my pride and take some advice from somebody who has made it. I thought I was a genius, I thought I was the smartest player.

I started looking for training videos and watched a lot from different websites. BestPokerCoaching attracted me the most not only because it had a tone of testimonials of success but also because it didn’t sound like bullshit. Every other site was with random words that I didn’t understand, or they tried to sound smart rather than actually teach you to make money. Started watching free videos from Gordon, and I was like “Wow, I love how this guy talks” because he focuses on the point.

5. Which coaching contract were you in? Can you tell us a bit about your progress in this program? Were there any roadblocks, moments of adversity along the way?

I was in the 5k NL 6-max Special Forces program. Until I reached NL50 I didn’t have any roadblocks, but when I reached NL50, the corona crisis started and it hit my family really hard both in economical and health ways. It was a big roadblock because I had to help and stay with them 24/7. I even wrote BPC and asked to take a break because I thought it’s not fair to have a student who is not playing.

I took a break of 5 months, came back, and finished my contract strong. My last month was around 3k profits of the 5k contract. It was crazy.

6. Was there any moment during your contract when you sort of “got it”? What was that moment for you?

The biggest moment was when coach Jake, told me to bet massive with the nuts when I didn’t have fold equity because I was autopiloting with this 75% bet sizing. It was a big aha moment for me when I started seeing people paying off and I thought “Man, these things really work!”

8. How are you doing now at the tables and in life? I heard you had your first 10k month right?

9. How do you find the recommended BPC rooms and apps? Would you advise people to play there?

I think it is a no-brainer decision to play there. It’s true that in the beginning, it is weird to play there because of the format with switching tables manually and the software is a bit different.

The first time I played, I was really confused and said “Man, I don’t want to play here, what is this?” but they are super profitable and in the end the format it is not a big deal. You get used to it.
To me it is a no-brainer decision and not playing there it’s like saying “Hey, I don’t like money.” I don’t understand why would anyone not play there. I guess they just hate money.

IF you’re doubting to play on the BPC recommended apps and rooms, I am the living example. My win rate is 3 times higher than on a normal site.

10. You also started coaching the students recently. How do you find that?

I think it is amazing. Not only because there are very active students, that always ask questions, raise their hands, and are active, but also because I think I learn the most. When I was a kid my father told me :

“You know, the teacher learns more than the student.” I’m starting to understand that now.

If the students join my webinars and are active, I have to prepare well. I cannot be the guy who just joins and answers questions. I have to give them some quality and this is why coaching it’s extremely good for me as a player.

11. What is your outlook for the future of poker, the game itself as well as your personal journey in the game? And where do you think we will find you a year from now?

The game of poker will always be beatable, and I am not afraid at all. There are always guys who pretend that they know everything and tell you “no, it’s not going to be beatable”. That’s bullshit!
Even if knowledge gets so good and everybody has this mega knowledge, like a solver launches tomorrow and solves everything really fast, every scenario and it is super easy to use and everybody starts using it, even in this scenario it’s still going to be beatable, and the reason is, what Gordon describes very good in his eBook Secrets Of The Poker Millionaire Mind, that you can always rely on the poor preparation of losing players.

There will always be poor people with a poor mentality and you can rely on their lack of preparation and that is why I strongly believe the game will always be beatable. As long as humans are playing it, the games just don’t die.

In one year I will probably be traveling the world, maybe I’ll be in Malta, or maybe in some other place. My intention is to live similar to Gordon’s lifestyle traveling and moving from country to country, basically do whatever I want.

13. If there’s one thing you would like to tell all beginners and starting poker players, what would that be?

Don’t be too smart. Don’t try to reinvent anything and do what you’re told and you are going to crush just by doing that.

I think the beginner needs to understand that his opinion is not relevant. If his opinion in this game was relevant, he would not be a beginner, he would be playing high-stakes.

This is the hard part, and it’s also something I had to do too. The beginner needs to swallow their pride and assume that in order to make it he has to do what others who have made it tell him. That’s my best advice!

14. Any last words or things you want to say?

Don’t think too much and play on the apps! And I am really looking forward to the next BPC Event.

Congratulations again Jorge and thank you for the interview. I am sure we will hear from you soon about a €20k month.

If you want to follow Jorge’s footsteps and start making money by playing on the BPC recommended apps, click the link below to get in touch with coach Jake:

PrevPreviousSchool Teacher now crushing Heads-Up : Going from the Classroom to the Online Poker Tables
NextAlessio case study: From a small dream to a bigger realityNext