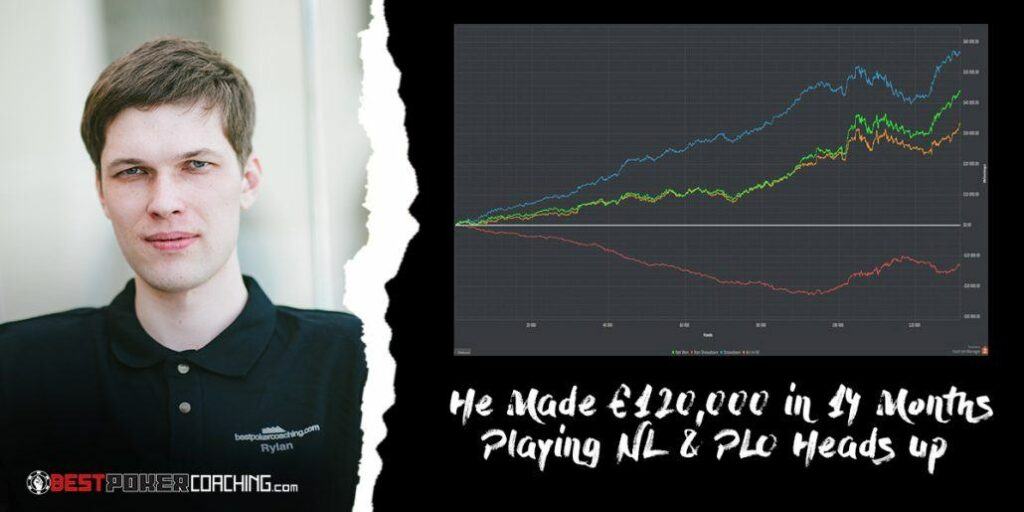 Finishing one €60k Coaching for Profits (CFP) contract is a remarkable thing and takes a lot of hard work and dedication. But what about finishing two €60k contracts?

That is what Rylan did. And he finished both €60k contracts in record time.

That’s right. Rylan made €120k in profits as a BPC student while in the CFP program. Now consider the fact that most people lose at this game and it makes it even more amazing.

Now, Rylan isn’t some poker prodigy with a mathematics degree who started playing at the age of 5. He actually said himself that he wasn’t the smartest guy out there.

But he was smart enough to join the best poker coaching team on the planet. He combined that with a great work ethic and total willingness to learn and you see the result.

BEFORE COACHING FOR PROFITS

Rylan discovered poker around the age of 20 years old, starting with a $50 bankroll. He started playing poker because he didn’t want to study at a university and end up with a normal job. He wanted more for himself.

For the first two years, he played NL 6-max cash games as he built up his bankroll through the micro stakes, but eventually switched to heads up once he reached NL50, saying, “I realized that 6-max became boring to me and I can win more money in heads up”.

He was able to beat NL50 fairly easily but got crushed once he moved up to NL100 in which he had to move down and try again at least 5 times.

RYLAN LEARNS TO CRUSH HEADS UP

Growing frustrated with his struggles at NL100 heads up, Rylan got some coaching from Gordon and eventually joined the NL Heads Up Soldier program at BPC. His main goal was to gain the skills necessary to move up and complete the €60k contract.

Below is his first post on his 2+2 blog where you can read about his progress while in the NL Heads Up program. He also has a blog on BPC that spans his entire time in CFP for both programs.

With Gordon’s coaching, Rylan was finally able to become a winning player at NL100 heads up. He started to game select better and even incorporated meditation into his pre-session routine.

But most of all he stayed humble. “Right now I’m on an upswing so I should continue what I’m doing and not start thinking I’m the God of poker and can beat every NL200 reg,” Rylan said in his blog on 2+2.

Rylan would even go as far as to make detailed notes at the end of the day with his coach and then try to repeat those notes in his brain throughout the next session.

Basically his plan was to continue working hard, stay patient and not do anything crazy while at the tables.

Rylan was able to finish the NL Heads Up €60k contract in just 7 months and 13 days!

Why? He was one of the most disciplined students in the program and did everything the coaches told him to do. And when asked what the best advice he could give to someone just starting out, he had this to say:

The best advice I can give in regards to poker is to find a good coach and do what he says, simple as that”.

Obviously it takes a lot of hard work as well but there is nothing super complicated about becoming a successful poker player, and Rylan was able to figure this out quickly.

He took the simple route, and to this day, still holds the record as the fastest finisher in the NL Heads Up Soldier program.

Upon finishing the contract, Gordon said Rylan was the “easiest” student he’s ever had.

Even guys like HansTheGreat and ImaChampion who made $100k in 9 months were harder to coach and cost him a lot more time.

“But it’s not about who is better, who would have been faster, etc. I just say it was EASY for ME to coach HIM,” Gordon said about his time with Rylan.

The reason it was so easy for Gordon was because Rylan simply listened to him and did what he was taught. It sounds simple, but it’s amazing how hard it really is once you’re in the trenches.

Short advice is just do what your coach says, even if you disagree. If your ego can’t take that, then you have a long road of pain ahead. Rylan just listened.

You would think one €60k contract would be enough, but this wasn’t the case for Rylan.

He wanted to earn more money and stay motivated so he agreed to a second €60k CFP contract in the PLO Heads Up program. Here is his intro video upon starting a second CFP contract.

Rylan had close to no experience playing PLO but he did not let that affect him. He did his thing, listened 100% to his coach and did absolutely everything he was told.

The result? Another record finish! Check out the Rylan’s €60k graph below playing PLO heads up.

He even broke his own record day inside the Coaching for Profits program! When Rylan was a NL Heads Up student, his record day was €8.1k with rakeback (top graph below).

While this is fantastic, he was able to crush it playing PLO Heads Up where he made nearly €15k in a single day (bottom graph).

Speaking of record days, we have a special video available only to readers of this blog (it is currently unlisted on YouTube).

In the video down below, Rylan crushes his opponents playing NL500 heads up on Full Tilt Poker en route to his biggest winning day ever at that point in his career. But that’s not the best part…

Most of his winnings on the day came from just a single opponent, where we he won a total of $6,577 over 730 hands!

Throughout the session, Rylan gets live coaching from Gordon where they talk about standard lines, balance, villain adaptation, specific plays against certain types of opponents, and several other topics.

If you ever wanted to know what it’s like to have a live sweat session with Gordon and get inside the mind of a crusher, this video as an absolute must watch. It’s around 45 minutes total with hidden gems throughout, check it out!!

EVERYTHING YOU NEED TO MAKE €10K EACH MONTH

We got the chance to sit down with Rylan for a few minutes at the BPC poker seminar in Dubrovnik and asked him about his time while in Coaching for Profits.

This is where he received his first trophy for completing the initial €60k contract for the NL Heads Up Soldier program in just 7 months and 13 days –  a record that yet to be broken!

Check out the video below to watch the full interview.

When asked how his vision of what he can achieve changed now that he’s been through the Coaching for Profits program, Rylan had this to say:

I can now achieve whatever I want. I just need to setup goals and do it.”

If it sounds simple, it’s because it is. Rylan came in with no ego, no bullshit and simply got to work. And the results speak for themselves.

But prior to joining the CFP program, Rylan’s BEST month was just under $4k. After Coaching for Profits however, he said he now has everything he needs to make at least €10k per month consistently.

And if course, he was also very excited to meet up with the rest of the BPC community and finally getting to meet Gordon in person after getting coached by him for the past year.

When asked about Gordon, Rylan had this to say:

“Gordon is a very good coach, every session I learn something new, it’s amazing,” Rylan said. He credited Gordon’s teaching style for helping him grow not just strategically but mentally as well. It wasn’t just theory after theory, but instead, a well rounded curriculum of everything he needed to crush heads up poker for years to come.

We also caught up with Rylan one year later at the BPC poker camp in Malta, where he received his second trophy after finishing the PLO Heads Up program.

He talked about how much higher the variance is in PLO and how important it is to be patient and not tilt. “Patience was sometimes difficult, but the most difficult was controlling tilt and the psychology aspect of it all,” Rylan said.

Considering he finished the PLO program nearly a full month faster than he did the NL Heads Up Solider program, we think he handled things just fine. I mean, the guy did end up having €120k in profits in roughly 16 months total as a BPC student.

If you’d like to check some additional written interviews with Rylan, you can do so by clicking the links below:

If you’ve read this far, you already know that Rylan’s success has a lot to do with him just listening to his coach and doing what he was told. But according to Gordon, there’s a little more to it than just that. Here’s what he had to say about Rylan when talking about why he was so successful.

“Other guys have crybaby excuses for everything little thing in life and all the reasons why they can’t do this and that. It’s excuse after excuse. But not Rylan,” said Gordon.

Gordon said that Rylan was never late to, or cancelled, a coaching session while in the Coaching for Profits program. Not even once. And when homework was given, it was always done and done well.

That’s not to say that other students don’t work hard or have valid reasons for missing a session. Quite the contrary, as we have many crushers here at BPC. But there’s a reason why other students will not finish as fast as Rylan – he just outworks them.

“If you want to finish super fast, you have to show up no matter what. Also, 99% of excuses are bullshit and the more excuses you have, the longer it will take,” said Gordon.

Rylan was also one of the few students who was always well prepared for coaching sessions. You would think that most people would prepare like crazy because you only get so much time. But you’d be surprised.

In addition to forums, group coaching, and access to course libraries, Rylan received more than his fair share of 1-on-1 coaching simply due to his work ethic and preparation. Because here at BPC, those who put in extra work, get extra back. When you join Coaching for Profits, it’s a partnership and things goes both ways.

So if you’re thinking about joining CFP, just remember Rylan’s story and the reasons why he was so successful. It’s not rocket science. Just cut out all the bullshit and get to work.

LIFE AFTER COACHING FOR PROFITS

You would think finishing two €60k contracts would be enough, but these days Rylan is on a mission to make a million playing poker.

With his work ethic and the skills he’s learned at BPC, there’s no doubt in our minds that he can achieve that goal and much more.

PrevPreviousHow To Get From Microstakes To $50,000 Months [CASE STUDY]
NextCase Study: How This 6-max Cash Game Player Turned $50 Into $500,000Next