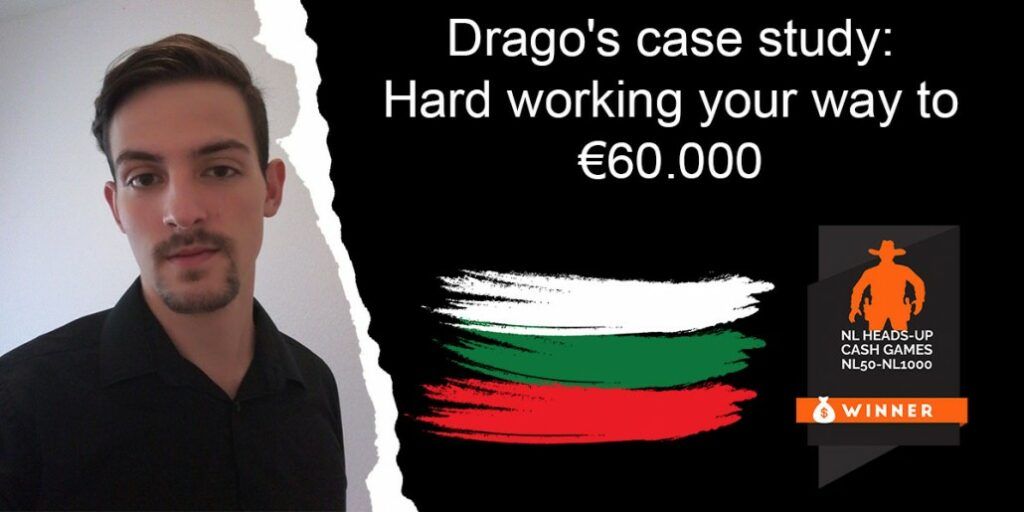 When you want to get in a Coaching for Profits deal here in our site, you have several formats you can choose, NL 6-max, NLHU, Zoom, Spin & Go, PLO 6-max, PLO HU and MTT. However, when you make a choice, it might not be the best one for you, it is completely normal.

We have 2 very successful cases in the NLHU Soldier program, Scott “Fred” and Lauri “hugocabret”. Both started their Coaching for Profits program in the NL 6-max course. With time they saw that it wasn’t a fit for them and they switched, finishing their contracts with some nice €10.000+ scores.

Dragomir “dlecheff”‘s story will be very similar to Scott’s and Lauri’s.

When Drago decided to join the Coaching for Program, he started in the NL 6-max Micro and grinded micro stakes for a very long time never moving up higher than NL5. Several months later, at the beginning of 2017, he decided to take the game seriously and switched to the NLHU Soldier program.

For Drago, playing 150 to 160 hours per month is absolutely nothing, especially if you want to achieve big things in poker:

“Sometimes I think, how stupid are we to say that we want to play poker and we want to reach €10.000+ months if we are playing only 150 to 160 hours? I was doing this one year ago and I was thinking I was playing a lot. To reach those hours I was playing 6 hours per day, which is very funny to me now. Since the beginning of this year, I’m constantly playing 10-13 hours per day, which makes a big difference in my game and I can see that I improve a lot.”

Poker is a game when you put in the hours and you also study outside the tables, the results start showing up. Three months after switching to the HU program, Drago hit his record month playing poker and received the green light to start taking shots at NL100.

But a journey to finish a €60.000 it is almost never a steady journey to the top, there will always be some bumps in the road. Sometimes you get overconfident in your skills, stop studying and start playing badly, and sometimes variance just hits you hard and there is absolutely nothing you can do besides keep grinding to minimize its effects.

In Drago’s case, the bump in the road was 2 losing months in a row. When you hit these bumps it is very important that you take a deep look in to figure out what you’re doing wrong and what you should do to go back to the winning track.

” When I look back, I think May was my best month so far. I’ve lost money, but I’ve learned a lot, improved my game and became mentally stronger. While I was winning, I did not put much time into improving my game, I was just playing like crazy and didn’t think at all about my game. When I started losing, I started looking at my mistakes and see where I was messing up. With the help of my coaches and the other students, we found a lot of mistakes which I was not aware I was making. Now I learned my lesson, even when I am winning I should take care of my game and look for mistakes. I know, that in the near future, I will start climbing up the limits again.”

Learning about this mistake he was making was very important for his progress. In the next four months, he had good results and was moved to the advanced group.

The advanced group in the HU program was “created” after the Poker Camp in Cannes in 2017. I put it between quotations marks because we already had something similar in the past. Before, we had belts in several colours and you’d get a belt once you hit a determined profit in that month. It was just too many groups and too many rules, so when we implemented the Starter, Intermediate and Advanced groups, everything was clearer for the students in a sense of what they need to do to upgrade to the next level.

“I had a sick session yesterday. Started the day pretty bad. I was 2 buy-ins down and then lost  2 more against a big fish on my highest limit, NL200. By the rules, I had to stop, but I could not let this guy with 3 buy-ins at the table when I was confident that I could take it back. I decided to stay and risk my goal to reach €5.000 in the month. It paid off! After 100 more hands, I took all his money on the table. Funny thing was that I was with a 300+bb’s stack at the table but the profit was only 25bbs. However, I kept playing and managed to recover the day and even made 1 buy-in profit after 11 hours playing without a break. I really lost control vs this guy and tilted hard, but I knew I could recover without taking breaks. Today I started again pretty bad, around 2 buy-ins down, but I finally to reach the €5.000.”

In this advanced group, there were 2 guys that now have already finished their Coaching for Profits contract. Scott “Fred” and Jernej “Myst”.

Scott is an important factor in Drago’s success.

Four months after joining the advanced group, Drago decided to travel from Bulgaria to Scotland to spend 2 weeks grinding with Scott and another Coaching for Profits student.

All the time spent between changing busses and airplanes to get to Scotland completly paid off. In the same month, he hit his first €10.000 month and in the following one, he earned €14.082 at the tables.

That put him very close to finish his contract. But the bumps on the road are always there to make things a little more difficult…

Two months after these great scores Drago broke another record, but one no one wishes to achieve, he broke his record month in the opposite way losing €6.661.

But that didn’t put him down, he kept grinding his normal hours, got everything back in the following month, and two months later he finished the program just in time to receive his trophy in Marrakech.

When asked about how was the Coaching for Profits experience for him he replied:

“It was eye-opening. It showed me how to approach new goals in life. It is super important to have someone to guide you when you want to get better not only in poker but in every aspect of your life. It also helped me to realize that it doesn’t matter how good coaches/mentors you have if you are lazy **** and don’t put in the work, you will not succeed.”

After Coaching for Profits

Not too long after participating in the Poker Camp in Marrakech, Drago and also Scott decided to move to Thailand to live in a house with 2 other Coaching for Profits finishers, Jan “Somebody” and Piotr “Goodfake”.

He is learning a lot in his new house and one of the players living in this grindhouse is coaching him in the same Coaching for Profits format he had in BPC. And it looks like it is working for him! When he finished the program he was playing up to NL600 and now he is playing up to NL1000.

Here is one of his most recent graphs:

Not too long after finishing the program he started coaching for BPC to teach the students that are currently in the program how to be as successful as he was.

Watch one of Drago’s coaching sessions below:

Congratulations Drago! See you in the coaching sessions!