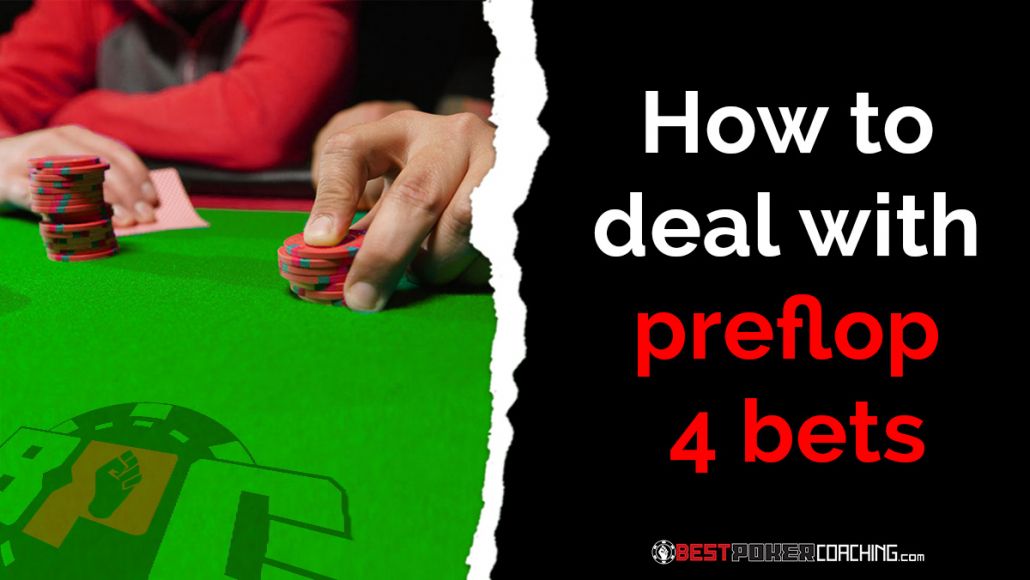 It’s become the fashion to adopt 3bet-heavy strategies. Many regs have no cold-calling range from the SB, and some of the newer generation regs are now also playing 3bet-only in CO/MP. We are not here to comment on the effectiveness of these strategies, simply to underscore that 3betting is more common than ever before in poker history.

As we might imagine, adopting a 3bet-heavy strategy whilst having no clue regarding how to deal with 4bets can be a big problem.  It’s also a very common problem. After all, there is plenty of strategy advice telling us to increase our 3betting frequency, but hardly any teaching us how to effectively defend vs 4bets. Well, here is the crash course version!


The first obvious indicator of an issue is our fold-to-4bet stat. It should likely be in the 50-60% region. Note that values above 55% tend towards giving the 4-better automatic profit, but this is typically ok in most environments since the average player has an overly low 4-bet range. A good winning 6-max reg will typically have a 4bet range in the region of 4-5%, whereas the average player has a 4bet range in the 2-3% region. In other words, it’s not a big deal to slightly overfold when facing a preflop 4bet from an unknown.

Once our fold-to-4bet stat falls outside of the 45-65% region we almost definitely have some sort of leak going on. We are either folding way too much or defending an insupportably wide range. Folding too much to 4bets might not be a big deal in anonymous environments but can potentially make us targets in lineups where screennames are visible and we are putting in decent volume. Many regs might hesitate to exploit a 60% fold-to-4bet stat, but the best play against an 80% fold-to-4bet is far too obvious.

Many players don’t have default defend-vs-4bet ranges, let alone different defending ranges based on 4bet sizing. However, the size of villain’s 4bet is extremely important in establishing the best defending strategy. In the modern poker environment, 4bet sizings can range from 14-15bb at the smaller end to over 25bb at the larger end. Using the same defending range against both a 15bb and a 30bb 4bet is not smart.

Let’s list some important principles for defending against 4bets.


1. The smaller the 4bet the wider the range of hands we defend.

Hopefully, this should be obvious. Not only do we get a better price to defend but the postflop SPR will be higher. The higher the postflop SPR in general, the more correct it will be to play a hand that might be second-best preflop. This is especially true when we are in position and have increased manoeuvrability.

2. The smaller the 4bet, the less we are incentivized to have a jamming range with 100bb effective.

The second idea might be less obvious to some players. After all, shouldn’t we 5bet more aggressively against a small 4bet? It depends on the effective stacks. With 100bb stacks, 5bet/folding is mathematically questionable. We typically want to be either 5-bet jamming all-in or flatting. Of course, the smaller the overlay (i.e the size of villain’s 4bet) the less attractive jamming becomes. We should hence find ourselves jamming more frequently against large 4bets than small 4bets. We’ll still defend wider against small 4bets overall, but jamming will be a smaller component of our defending strategy.

Although we jam tighter against small 4bets, flatting becomes a very attractive option when the 4bet sizing is small. Many players have a hang-up where they have been conditioned to either 5bet or fold when facing a 4bet. Small 4bets are brutally effective against such an approach. Why so?

Folding frequently is a mistake when getting a great price, and jamming is unattractive due to the small overlay.  If we force ourselves to either jam or fold, then we are picking between two bad options. The best counter is to start flatting a much wider range against such 4bets. Some poker schools even still teach that “flatting against 4bets is incorrect”, but without this important tool, a skilled opponent can cause us a lot of trouble.


4. Flatting is less attractive when OOP.

Our jamming expectation usually won’t change that much depending on whether we are IP/OOP, but the expectation of flatting will. IP hands gain an equity realization bonus in 4bet pots after flatting. If a hand is close between a flat and a jam it will often end up being a jam while OOP but a flat while IP.

Many players are confused regarding the function of a 5bet range, especially value-hands. For example, when jamming AKo in a late position battle we might think that it is preferable that our opponent has a low fold-to-5bet frequency. After all, we are shoving for “value”, and if villain folds a lot we could isolate ourselves against a calling range that beats us.

This is an example of an inaccurate assessment of the function of AKo. It isn’t too taxing to demonstrate with tree-building software that the higher villain’s folding frequency, the more profitable our 5bet jam becomes. In other words, AKo functions more like a semi-bluff than a value-jam. The main reason we prefer folds over calls is simply that our opponent gets to fully realise his equity when calling, but none of it when folding.

50% fold-to-5bet is a sweet spot in the sense that, if our opponent is folding more than this we can proceed by 5bet jamming relentlessly. Much higher than this value and we could find ourselves being able to 5bet jam any 2 cards profitably. However, if our opponent never folds to 5bets, we can only get away with expanding our jamming range by a minute amount. (In other words, our opponent calling too much vs 5bets is not that exploitable, but if he folds too much, we can print money.)

We should therefore not be especially concerned if our 5bet jam with a holding such as AKo is consistently an underdog when villain calls. This absolutely does not mean that 5betting was a mistake. Many players might incorrectly deduce that they are value-shoving too thin when they see their average equity with AKo is <50% when their jam gets called.

We might wonder “isn’t it simply better to flat the 4bet, if our AKo jam would be an underdog when called?”. In some cases, it might be, but it’s important to keep in mind that hands such as AKo have equity realization issues when calling a 4bet, especially when playing OOP. It’s hence easily possible that the expectation of jamming beats the expectation of calling a 4bet, since certain preflop holdings have a tendency to under-realise their equity in 4bet pots. (Note that suited broadways such as AKs do a lot better on the equity realization front, especially when IP).


Most of the scenarios where we deal with preflop 4bets are going to occur in late position since this is where ranges are widest. Let’s see some sample range constructions for dealing with 4bets. These are just a rough guide, the exact range construction we choose will depend somewhat on our initial 3bet range. After looking at the examples we can consider constructing defending ranges from other positions. 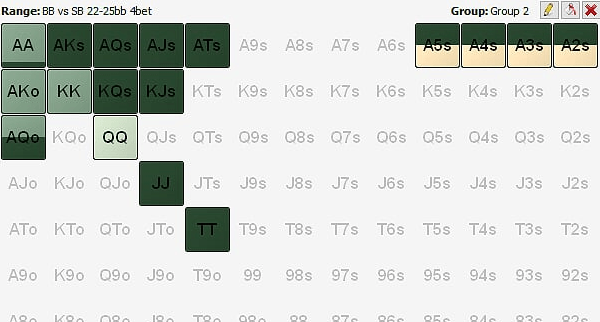 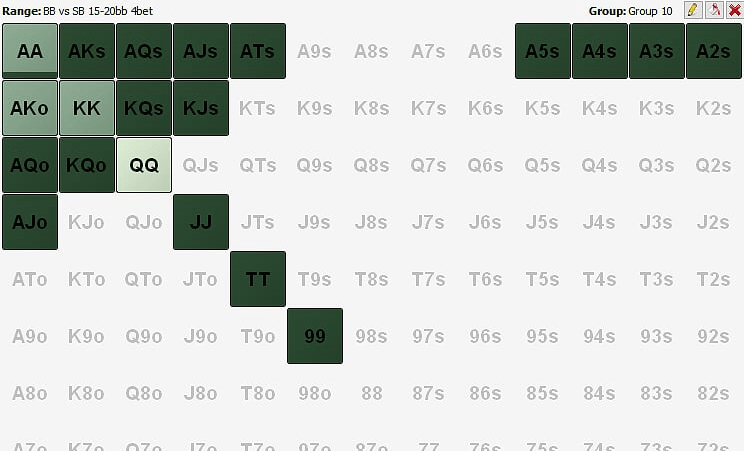 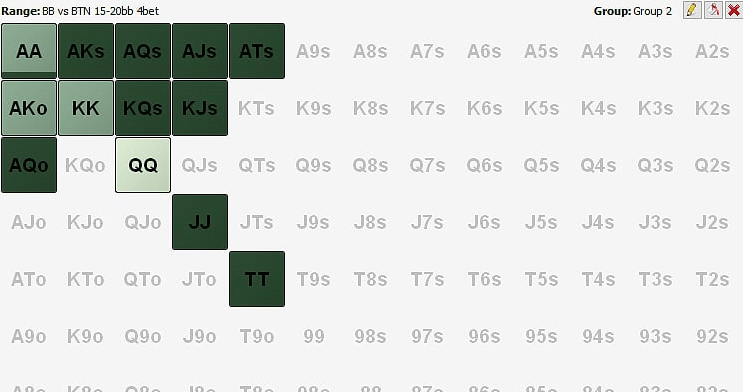 
Take a closer look at the BB vs BTN Small 4bet defence range as an example. AKo is in the jamming range while AKs is in the flatting range. Why is this the case?

It’s true that AKs typically has a few percents extra equity when compared to its offsuit counterpart. AKs will hence undoubtedly be a more profitable jam than AKo. AKs realizes its equity a lot better postflop however, so it’s possible that the expectation of flatting with AKs is higher than the expectation of jamming. (Think about how it’s easier to call flop cbets when we have a backdoor flush-draw or direct flush-draw some percentage of the time.) Some of the hands in the jamming range are hence weaker than those in the flatting range. This approach also allows us to protect our flatting range with some premiums.

Can this approach be demonstrated to be theoretically correct? Unfortunately, not at this stage. Any models we run would usually involve a high enough degree of assumption regarding the postflop tree that results could be misleading. Interestingly, neural networks such as Pokersnowie prioritize jamming AKs over AKo in the same spot, despite equity realization issues postflop with AKo. Snowie literally jams all the highest equity hands and flats the weaker holdings with little or no range protection. Which is correct? Time will tell – but in the meantime, it’s good to be aware of the issues and be able to make an informed decision.