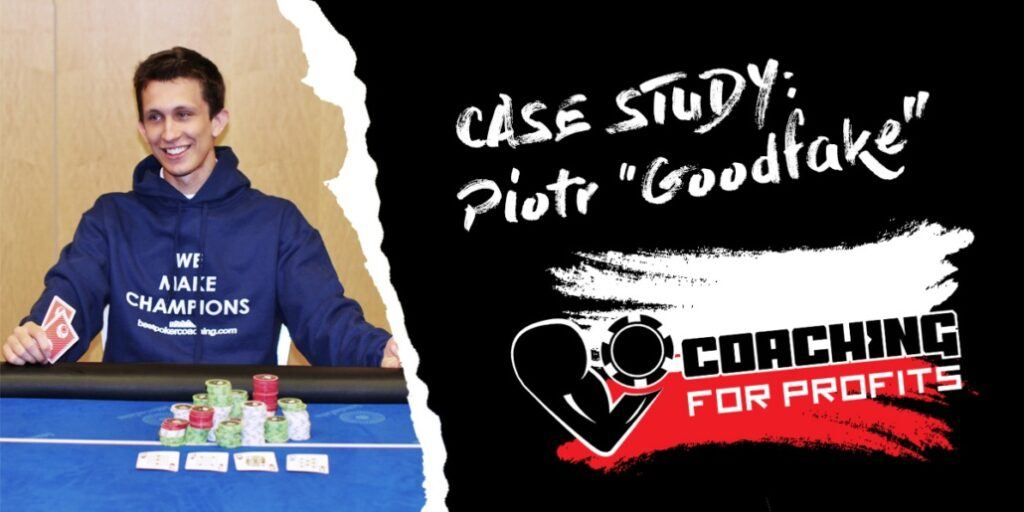 Piotr Leszcynski was 23 when he came to Best Poker Coaching in late 2014. He’d been playing for a while (about three years) and was doing a bit of short handed $0.25/$0.50 NLH. By his own admission he wasn’t “making much money,” instead he played just to get a little extra spending money for the finer things, if not quite the finest.

“I just wanted to have $$$ for parties,clothes, gym and other things,” he wrote in his first blog post after signing up for the NLHU Soldier Coaching programme. But in December 2014 he made the decision that now was the time to was time to get serious.

He booted up his computer, signed up with Best Poker Coaching and Piotr “Goodfake” Leszcynski, heads-up pro was born.

The first thing we had him do was play a few thousand hands of heads up $4NL. Not the most auspicious start you might think for someone who’d been doing alright at $0.25/$0.50, but it gave Piotr time to adapt to heads up play and our coaches a baseline to build from without putting too much of his roll on the line.

It was a good start for Goodfake, he was winning at about 30BB/100 over his first 10k hands at the ultra-micros. After going over the basics with his personal coach ilidek he soon moved back up to $50NL and the course began in earnest.

And earnest is the right word.

His first experiences at NL that level were pretty positive. They were so positive because he was an incredibly diligent student, doing all his assignments, putting in the volume, listening and working closely with his coach. In his blog he wrote:

“nolife mode: ON. This weekend ive played so much 21,5h of grind in 2 days, fk the parties :D. Results are very good too in last 8 days since i started to play NL50 i’ve made profit about 2k+Euro without rb’s.”

He’s one of those people who really throw themselves into things. He didn’t like his body, so he hit the gym. He was bad with girls, so he went out and practiced talking to strangers. He wasn’t earning his living at the game he loved, so he came to us.

His natural spark for hard work was bolstered not only by the professional coaching he was receiving but the great community we’ve built up here at Best Poker Coaching. “i play a lot,” Piotr wrote in his blog at the end of that first month. “i work on my game a lot, there is no capability to procrastination. Everyone helps each other, no1 works only for himself. I feel that all of us gonna make huge progress in one year. SKY IS THE LIMIT.”

It paid off. That first month on the Heads Up Soldier programme he won €2.7k after putting in time at the table for twenty-eight of the first thirty-one days.

Like most of our students he found his occasional session with Gordon an eye-opening experience! Luckily he took and Gordon meshed well and we all watched Piotr’s graph on its slow and steady rise.

The problem for Piotr though was that his rise was too steady at first. Despite all that diligence and relentless hard work that graph just wasn’t getting steeper. In fact for those first few months very few players have been as consistent as Piotr.

At first this was encouraging and it drove him to redouble his efforts, looking to increase the number of hands he played. He also undertook a new fitness regime, pumping iron and increasing his calorie intake to a whopping 4,000 cal/day, started meditating, and almost quit drinking alcohol altogether.

But eventually he hit a wall. Whether he got the yips or a case of the run-bads he had a few break even months in the middle of his steady €3-4,000 months that led to a sense of frustration.

“I figured out that i waste a lot of time while i wait for action, i check fkn FB , grindin youtube and doing other useless stuff instead of doing something productive. I don’t know why but im too lazy to turn on some materials now and start study during that time. It’s always like that and i hate it . . .”

All this time his poker playing was still funding regular trips to the sweetest spots in and around Eastern Europe, Slovenia, Croatia, the Ukraine. He even got a poker holiday to the Philippines and paid for his trip to Thailand out of his profits.

But Piotr aims high when he aims at all and he wanted more. Steady though his income was, he found he wasn’t showing the improvements he wanted. Until Dubrovnik happened.

At BPC we often arrange live events, gathering coaches, students and other members of our vast and diverse community of players in one place for a weekend of meetings, community events, and so much poker.

In the summer of 2015, about 8 months into Piotr’s contract with us, BPC went to Dubrovnik. It came at exactly the right time for him.

That week-end in Dubrovnik seemed to kick him into overdrive. Recharged by time spent with other hungry card sharks who were looking for the same kinds of success, he went on in September to take down his first five figure paycheck for a little of €11k.

He followed that up with the same again in in October, and then set a new record in his last month by taking down €14,352. He had completed his contract goal of €60,000 in profits, and with two-thirds of that windfall hitting his account in the last three months.

Paid Up and Flying Free 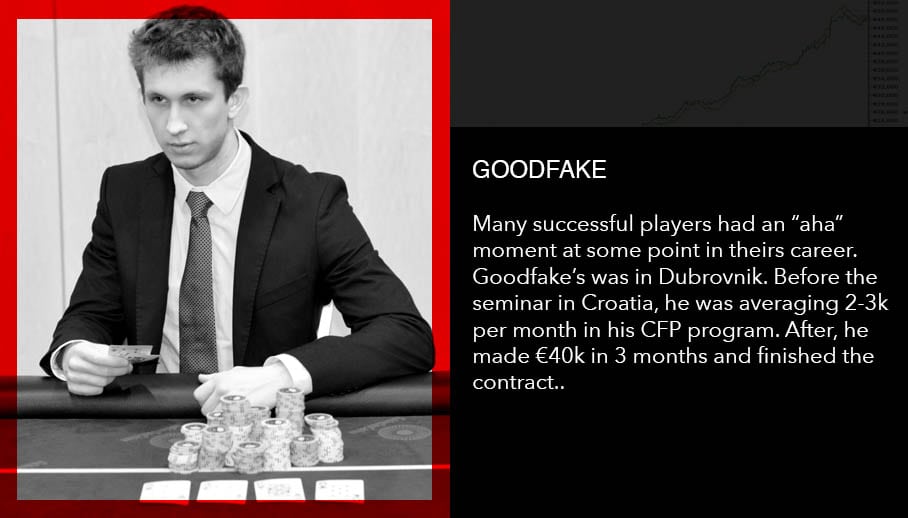 With his contract paid up and his skills razor sharp he’s off to new and greater things now. It took him just 10 months and 20 days to hit his goal of €60,000 profit.

I think he’ll probably have enough money for those “parties, clothes, and gyms and things now” and plenty more besides.

The sky is no longer the limit for Piotr. Now, he’s shooting for the stars.