CASE STUDY: How JurassicDaniel Got From Freerolls to a €100k Roll 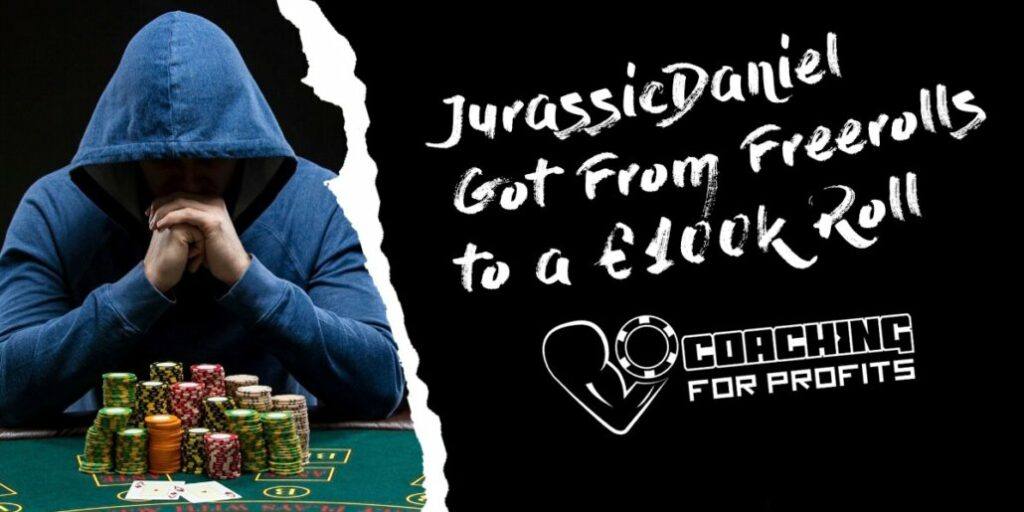 JurassicDaniel didn’t just make €100,000 by joining Best Poker Coaching’s coaching for profits programme. He did so well we felt he had stuff to teach us by the end of it. He’s been one of BPC’s most popular heads up coaches now since he graduated in 2015.

Now he’s dedicated to teaching you the secrets of how he did it.

But he wasn’t always the hard nosed pro we know and love now. He used to be a bit of a poker hobbyist. A serious hobbyist, but nonetheless he wasn’t going pro any time soon.

In 2007, he pocketed his first win ever in poker game, playing a partypoker.com freeroll. Using that small windfall he turned into a sit’n’go grinder for almost a year before putting his toes in the heads-up waters and finding that he could get some fish to bite.

He has never made a deposit to a poker site that didn’t come out of the roll he spun up from that first score in a freeroll. In that time he did some study. “I played SnG for 1 year,” he wrote in his blog, continuing: “and started playing heads-up in 2008. I read over 40 books and my prefered video-series are Gordons and DC –> Balugawhale (can recommend everyone to buy his book “Easy Game”) and Grindcore.”

JurassicDaniel was a natural gamesman, his hobbies being “reading (thriller, history novels), sports (soccer, tennis, table tennis), chess and parlor games (settler of catan, Aquire,…).” But he recognised the need to seek out the best and learn from them if he was going to get to the point he could quit his day job.

Real inspiration found him when he watched BPC founder, Gordon Gekko’s pokerstrategy video entitled Champions Stand Up One More Time Than The Rest. “I knew his site but his HU-Course was not cheap. But you have to risk when you want to learn and improve. So I bought the “HU Mastermind” and watched it already twice […] I´m down for about 1000 $. After running so bad I have problems with my self-confidence and played to just a few hands.”

At last though, he was on the way to changing that around.

He started the course on the 21st April 2013. Little did he know that 2 years and 18 days later he would be paying his last cheque to BPC having hit his contracted €100k profits. After that the paychecks started going the other way when he joined our coaching team.

JurassicDaniel felt pretty confident going into the course knowing he’d get his value for money. Besides, as he put it: “you have to risk when you want to learn and improve.”

Pretty much daily for those first three months of the course he posted daily to his BPC blog. Each entry he made was broken down into ‘Poker Goals’ where he laid out his aims for the day and how close he’d got to achieving them, ‘Tilt Exercise’ in which he checked in on his mental game, and a well analysed hand history.

There’s also the odd homework exercise and infuriated rant, but on the whole it is a perfect example of how our courses help shape a player’s learning experience, focusing on mastering the basics of the game from setting up your HUD, avoiding tilt and learning the standard lines. .

His blog is a textbook example of how to track your progress, online and gave the community and his coaches plenty to work with in providing feedback on his game and his progess.

As well as blogging like a maniac, he dived into the community head first, getting involved in study groups and making the most of BPC’s terrific gang of motivated and informed (more and more so every single day) players.

Once he had the basics down pat, his coach has him move on to working on adaptations more personal to his own strengths and plugging up his individual leaks. Above all in JurassicDaniel’s case the spectre at the feast was tilt.

The Cost of Tilt

No one knows the importance of the mental game like JurassicDaniel. For those early months, his biggest leak was tilting and forgetting everything he learned as he played back faster and more aggressive.

“When I get on tilt I don’t destroy anything or play like a maniac. Mainly I start playing too fast and don’t have enough time for thinking too deep and to pay much attention to the stats.”

If you want a lesson in persistence, though look at this graph for the first 58 days. 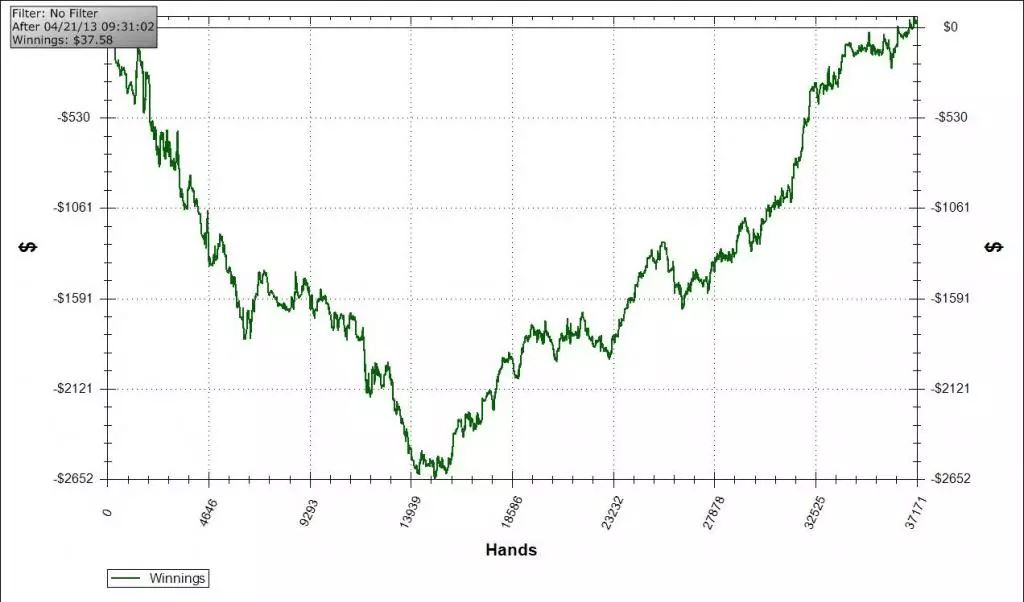 “I started with the heads up mastermind on the 21st April and was down almost 2700 $ after 14,000 hands. That was the worst down in my life,” he wrote. “I started to think about my game and changed some things, was more structured, overworked my warming up/ cooling down process, read mental books,…. and now I’m up. It’s my mentality to never give up and fought to get this graph”

With the changes he was making to his game, and the work he was doing to keep his mind on an even keel, he turned that around. A couple of years later he would be able to take such things in his stride even being able to joke about it:

“The month is finally over. All in all I run 3000 $ below ev. The good thing was that I had the chance to work 3 weeks on my tilt”

But before he could get there he had some more growing to do as a player.

Getting Into The Swing

After that nasty downswing in his opening few weeks, and once he got himself back into profit he had settled into his regular coaching sessions with Gordon himself. Now that he felt he was on the rise, JurassicDaniel took to the games with renewed vigour.

By mid-August, after being on the course for five months he made the move up from $50NL to $100NL. Not long after that he hit his first >$3k week. From then on 6k  payouts per week became the norm for him.

By November he had eaten the $200NL limits alive and was looking to move up again.

His rise was astonishing. 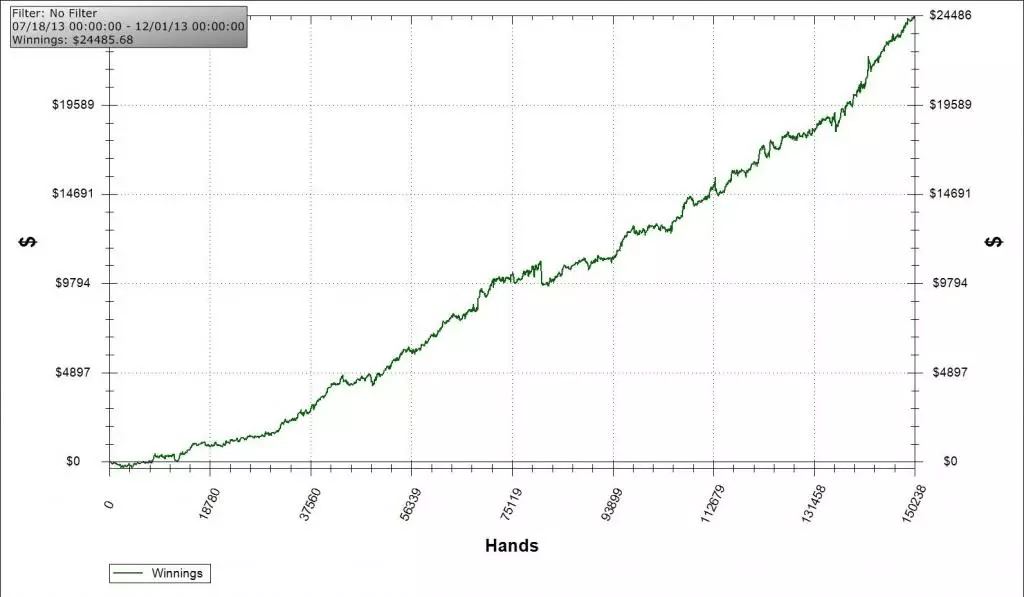 He was really into the swing of things. But what made him stand out was that his game never stagnated, every post he writes describes the slog he made for himself, by seeking out higher and harder games. Putting his moves under a microscope and constantly training to keep his tendency to tilt in check.

“I never thought that I would be able to reach my goal in such a short time. I just can thank you very much to Gordon. He was always patient to answer my questions. And I asked a lot. So what is next? I think I will try to get the skill and bankroll to play NL1000. Here we go.”

Welcome to the Team

Someone as hardworking and as profitable as JurassicDaniel, especially one who involved himself in the wider community BPC has to offer, was too valuable to lose to the outside world when his contract came to an end. So before he finished up BPC popped the question, would he like to join the coaching team.

It was a no brainer for him. Here was a community he loved, and an opportunity to teach the game he was passionate about, to players who were hungry to learn. He was in.

Since then, he had been one of our most popular heads up coaches with student, “Just wanted to also ty for the coachings you do for us – freaking awesome!” eatyourpeas wrote to him.

After all, if you’re looking to start your own €100,000 heads-up journey, what better guide than the man whose done it all before you.

PrevPreviousCASE STUDY: How KanelBullar Made His First €60k With BPC
NextCASE STUDY: Vidarbusk Does €60k In One YearNext