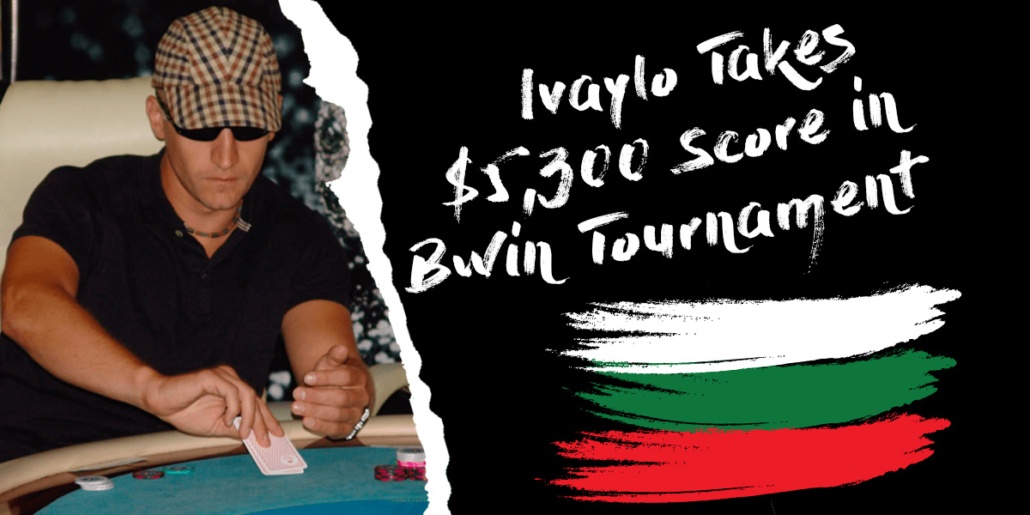 It was worth a shot. The $33 Six-Max tournament was part of the Bwin/PartyPoker Monster Series and featured a $50,000 guaranteed prize pool. The tournament had already been underway by the time BPC student Ivaylo Stoimenov registered on Oct. 30 at 11 p.m.

Along with the Six-Max, the 38-year-old from Sofia, Bulgaria, registered for three more MTTs. A student in the MTT Coaching for Profits program, he began with 33 big blinds at Level 23. That’s not too bad, but Ivaylo quickly realized he’d need to make some big moves soon.

“With the level changes and the many blinds you play shorthanded, it gradually became a stack for a push/fold strategy,” he says of the event, which would attract 1,357 players.

He quickly tripled up after hitting a set of fives against two hands with an Ace. He utilized more moves he’d learned in his training as he advanced.

“I bullied relentlessly at the money bubble and after that I managed to go deep in the money,” he says. “Most of the time my stack was in the healthy range of 30 to 50 big blinds and when it was decreasing, I was lucky to hit a pot to recover.”

The hard work paid off and after making the final table, Ivaylo took runner-up for a nice score of $5,323.80. The tournament took almost seven hours to complete –  about $761 an hour. Most of us would certainly be happy with that. 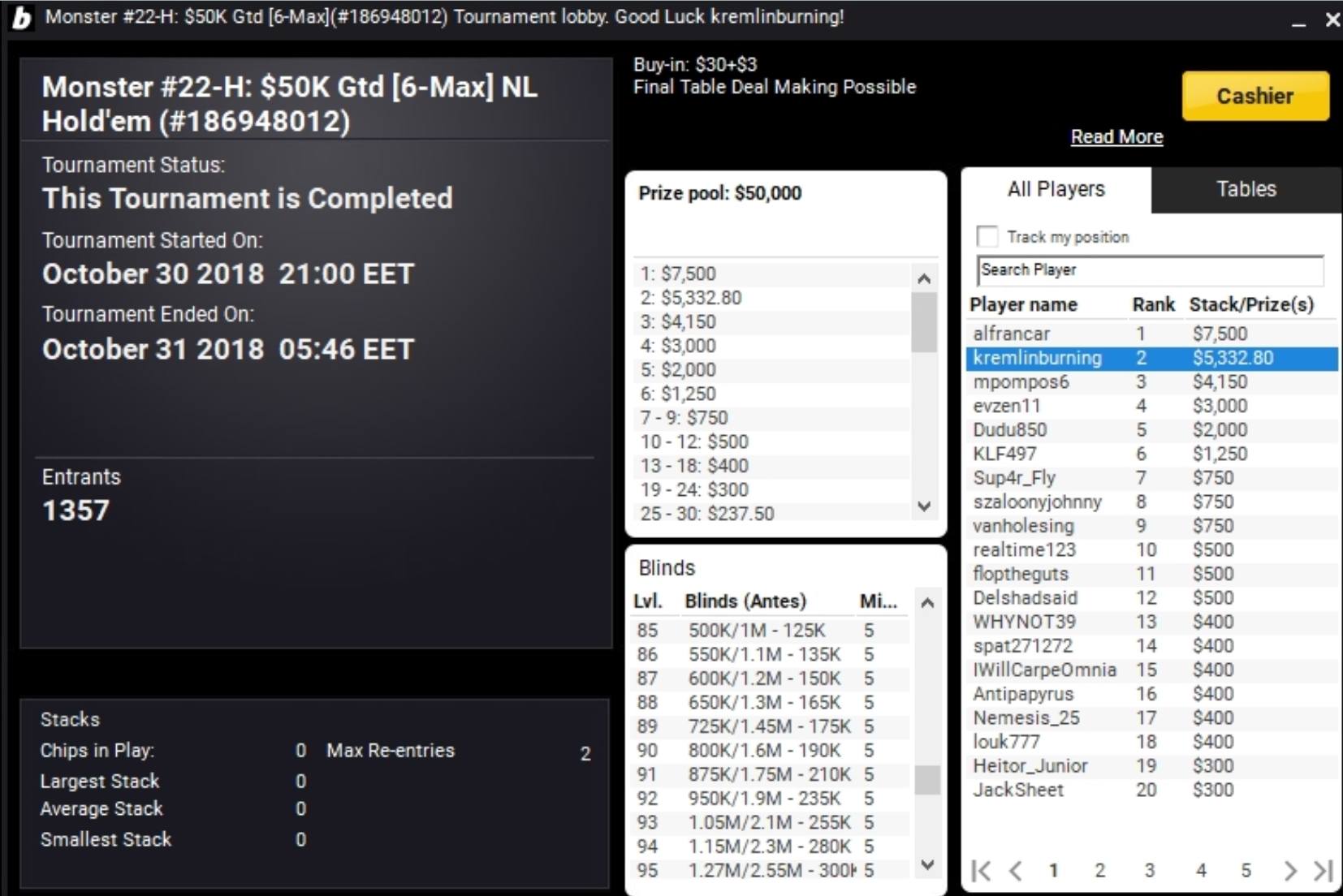 The big finish didn’t come easy for Ivaylo, who plays under the screen name “kremlinburning.” After rewatching the tournament, he found some mistakes in his play including “some weird folds or rejams due to multi-tabling timeout effects, but luckily those didn’t bring any fatal consequences.”

There were other challenges that could have ended his big run. During level 70, Ivaylo took a huge blow. With an open-end straight draw, he lost a huge pot to pocket Aces and saw his stack shrink to 19 big blinds.

Despite that setback, he succeeded in rebuilding. A set of Jacks with two tables left brought a triple up and moved him back to 72 bg blinds. That big stack allowed for some bullying of opponents to build even more.

“I used my chips advantage to terrorize everybody,” he says. “That’s how I entered the final table as a chip leader with 75 big blinds and continued in the same manner – also having the amount of luck required for a tournament victory.”

At the final table, Ivaylo was a force – eliminating all four other players before heads-up play. Squaring off against a player nicknamed “alfrancar,” Ivaylo began with an 85 to 28 big blind advantage. He continued with his aggression. However, a few of his bluffs were unsuccessful when his opponent hit pairs and played them passively.

The breaking point came when he hit a flush, but alfrancar had a full house and took the lead for the first time. Their stacks began to swing up and down a bit, but Ivaylo was never able to get much of an advantage again.

“As the guy was folding a lot, every time when one of us was under 20 big blinds I was pushing with quite a wide range,” he says.

After about 40 minutes and down to 20 big blinds, Ivaylo’s A-3 was beaten by 5-5 when the two players got all their chips in. Looking back, he believes it was probably a mistake and left him a bit disappointed. He planned to discuss the situation with coaches in more detail. The winner took home $7,500, but Ivaylo was pleased overall with his showing.

Despite finishing at 5:46 a.m. sleep didn’t come easy after such a massive score.

“I couldn’t fall asleep immediately,” he says. “There was a storm of thoughts and emotions in my mind – what to do with the money, how much to remain as a bankroll, what I need to buy.”

He may have been exhausted, but this poker player was still thinking about the game. 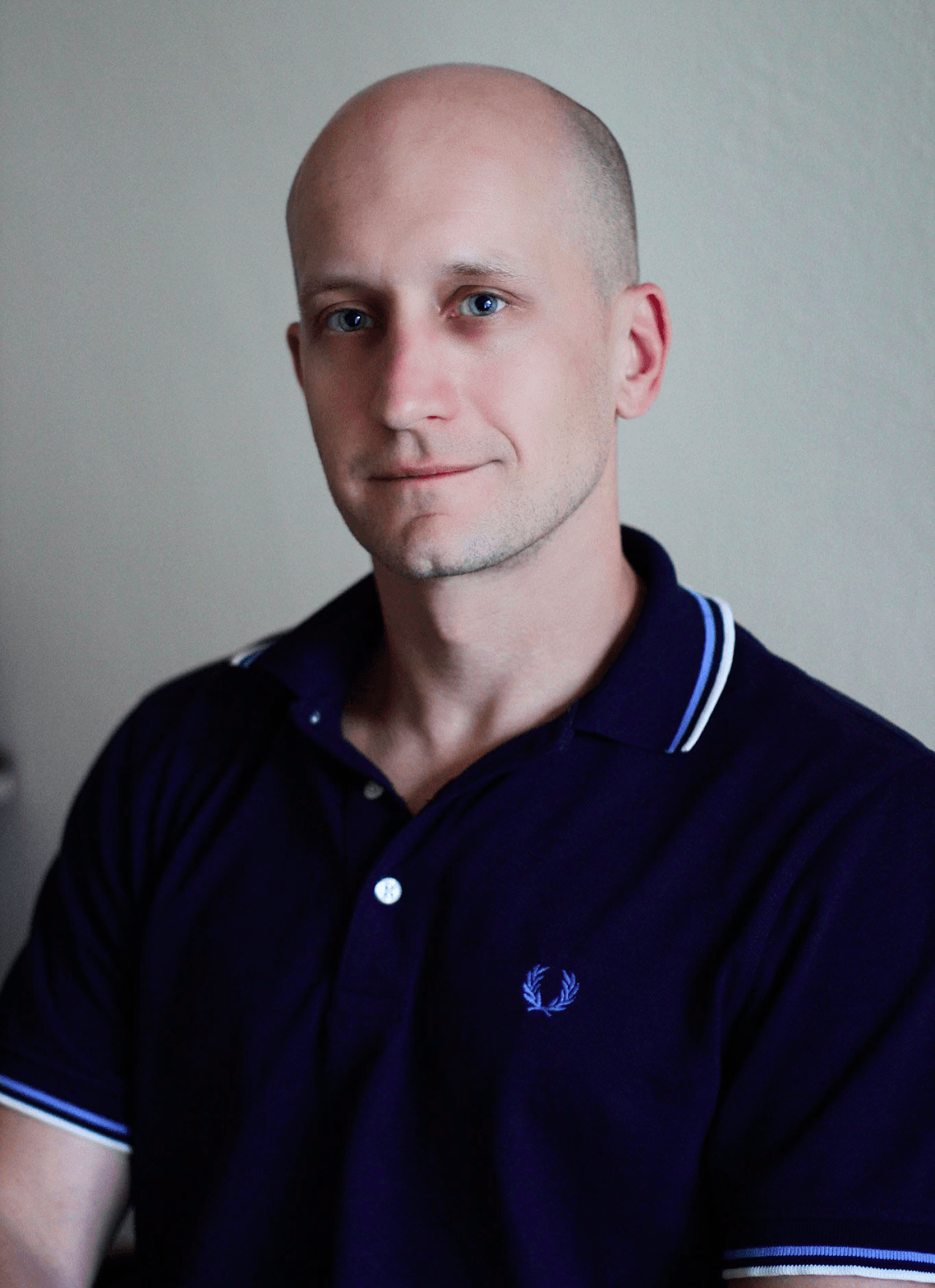 BPC to the Rescue

This wasn’t the Bulgarian’s first big tournament score. In 2015 before joining BPC, Ivaylo won $6,800 in a Sunday Million but didn’t retain enough money for a bankroll. His training has prepared him better for these types of scores now.

“This time I am much better prepared thanks to my enrollment in BPC,” he says. “Even if I have a very long road in front of me, which will not always be easy, I believe that ultimately it will take me up and ahead.”

Ivaylo began playing about eight years ago after seeing a promotional Unibet tournament awarding a trip to an English football game to the winner. He’d always been good at intellectual games, and gave it a shot. He now realizes what may have looked easy takes time to understand enough to excel.

Overall, BPC changed his way of thinking about the game – more practical and mathematically.

“I understood that I have lost years of my life and a lot of money doing things wrong,” he says. “Our coaches Julian and Thomas are not only nice guys, but more importantly, devoted and hardworking professionals who constantly explore, analyze, and improve their own game and knowledge. At BPC we have the chance to get all the new concepts and trends as the game is changing constantly. To be on the top you have to stay aware of that.”

He credits the site with not only improving his game, but also instilling discipline in studying and putting in the hours. Working as a real estate agent in his day job has limited some of his playing time, but he seems to be making progress after a recent downswing after being in the program for eight months.

“I had the ambition to complete my 10K contract in record time, but reality was different,” he says. “My last few months were terrible and during the last two weeks I lost my appetite for the game. I had doubts about my poker future and became less active in the weekly webinars and the community chats. Now I am back stronger than ever and able to fulfil my dreams.”

Poker remains a big part of life for Ivaylo and the win only serves as more motivation.
For him, poker means freedom – a dream to live life traveling around the globe, working from any place with an Internet connection. His dream is “to get rid of the winter,” waking up early, and become a successful full-time poker pro.

He continues to work on his tournament game and hopes for continued success. What does he enjoy about tournament poker?

“I am attracted by the life-changing opportunity provided by the tournaments in comparison with the day-to-day steady grinding of cash play,” he says. “Of course, both options have their strengths and weaknesses, and with tournaments you depend heavily on variance.” 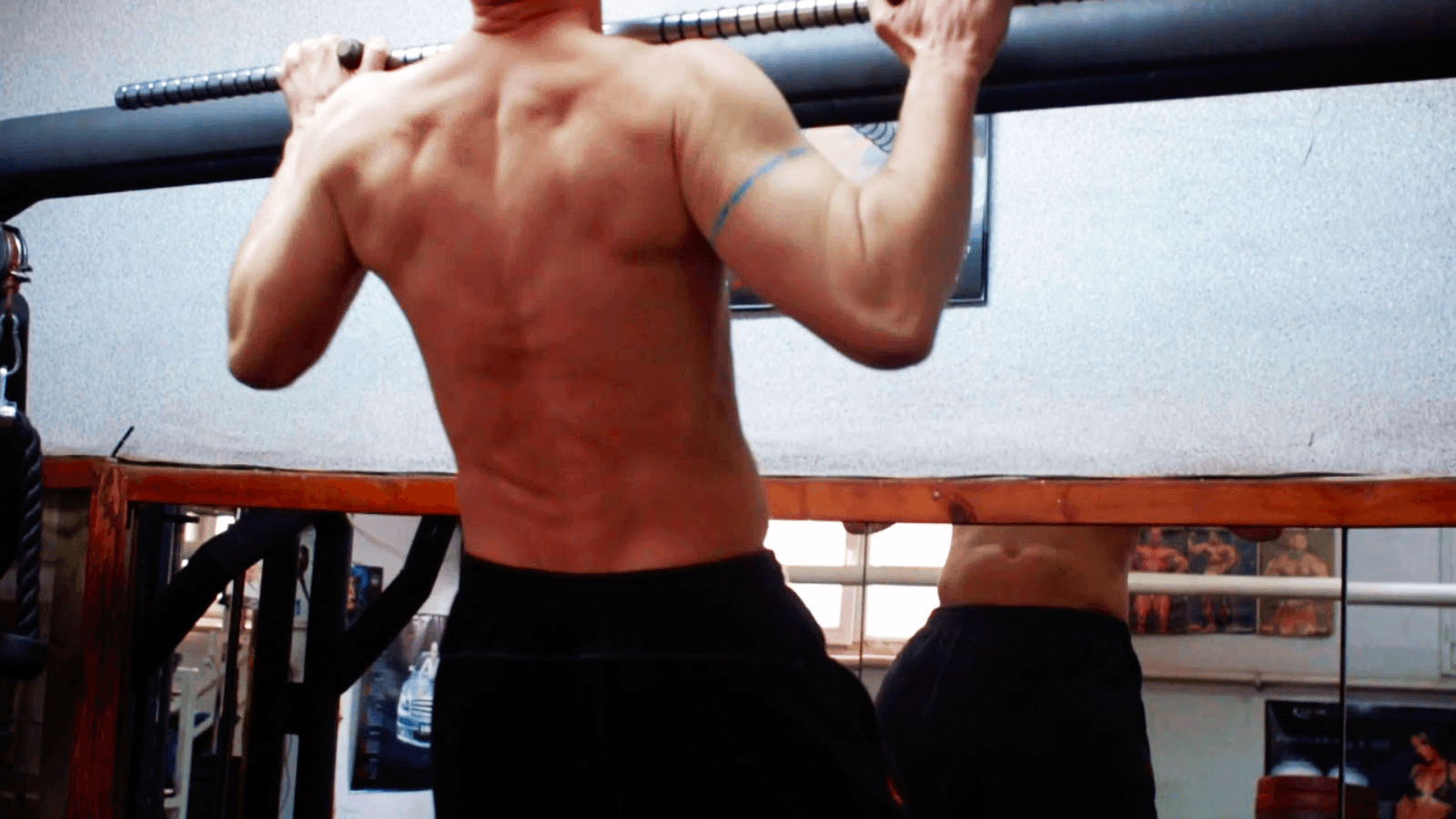 Away from poker, he enjoys reading, cooking and to mix in some partying when he was a bit younger. Nowadays, however, he’s more of a wine lover than a party animal, and also enjoys working out. He loves to travel and has visited more than 30 countries on four continents.
As he continues his training, Ivaylo believes big things are ahead and is encouraged by the team spirit in the MTT program.

“It’s a group of people with similar goals, dreams, and problems, who support each other in the learning process and cheer for teammates when they make a deep run,” he says. “It’s helpful and comfortable to have that sense of community, even if we don’t meet in person but only online.”