BPC Member Blog of the Month 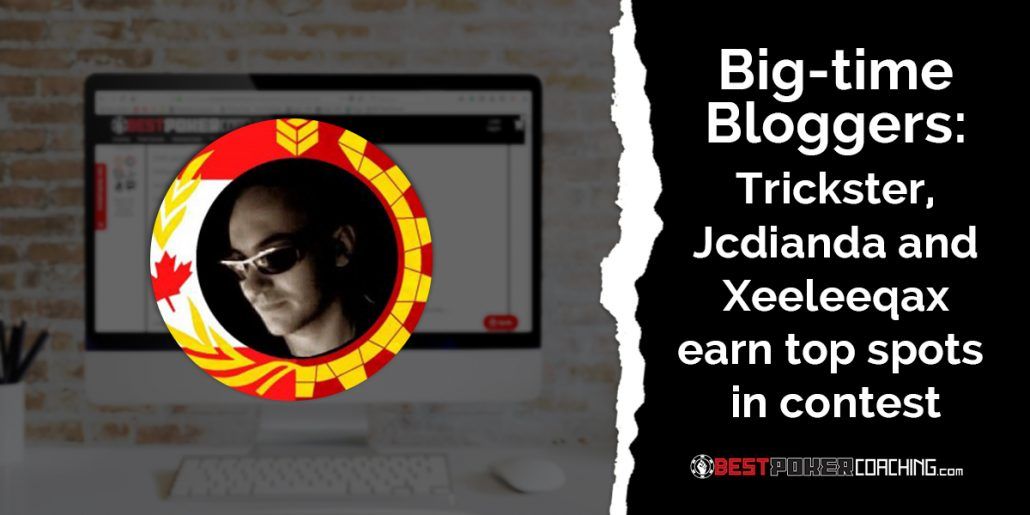 The contest is simple – each CFP student must have a minimum of eight blog posts each month (at least two per week). The Top 5 blogs with the most updates will be voted on by the BPC community BPC Club Facebook group. Players can also get rewarded twice by creating a blog also on PokerStrategy and TwoPlusTwo. Here is what the winner took home: 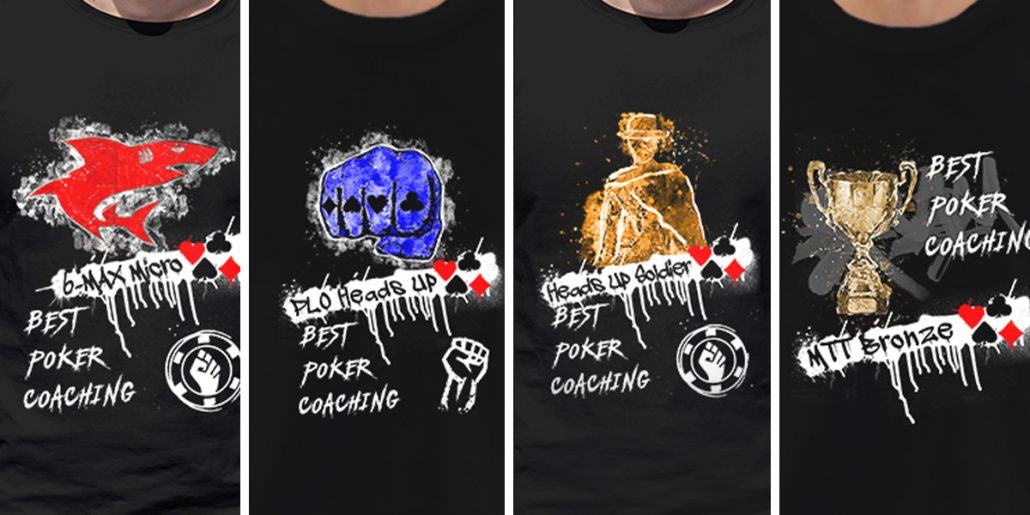 The goal for the program is to to encourage a few qualities important to successful grinders – discipline and routine. Keeping up with a poker blog isn’t easy, but these students are eager to share their poker successes, challenges, and their own personalities. Here’s a look at February’s winners: 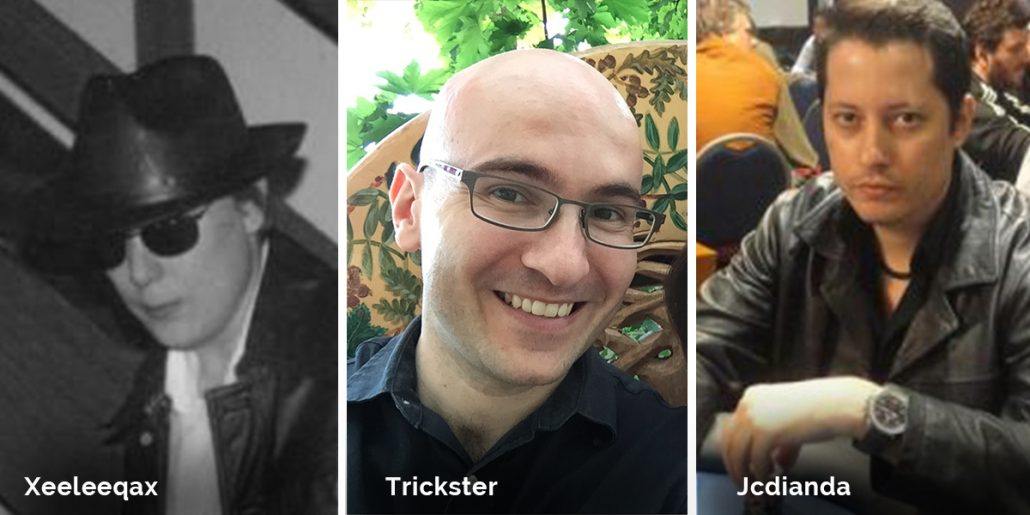 Discipline is key in life for Domenico Mongelli – and his blog is a big part of that. He believes posting motivates students to stay disciplined and publicly show their work and progress.

Mongelli also views the BPC blogs as a way to be more social and learn some things from other players. His efforts at sharing with others earned him the February Blogger of the Month title.

“It’s a good idea to know a bit more about each other and know the goals and the motivations that move each of us to dedicate time and effort to this game,” he says. “My blog has absolutely nothing special. I think that what I do is achievable by 90 percent of people. I’m just very disciplined guy and I constantly post  exercises and other updates on a regular basis.” 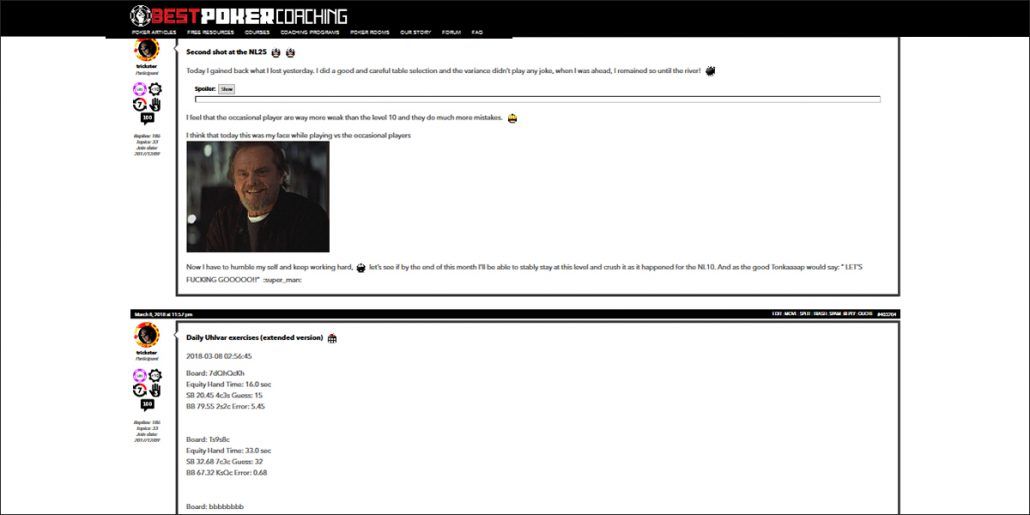 As a daily blogger, Mongelli posts exercises and weekly updates. Another interesting part of his blog are his “Hero of the Day” posts, focusing on hands where villains (or sometimes Mongelli himself) did something very stupid and yet managed to win the hand. A recent example:

Mongelli sees the blog as the tale of his journey and is “trying to integrate more entertaining material in order to make it even more enjoyable to read.” Mongelli also sees it as something to read and serve as motivation during tough moments.

A piano teacher in his regular job, Mongelli started playing after the Moneymaker effect. He liked the psychological aspect of the game, and was soon playing on Zynga for free, then Pokerstars without any success.

“My progress with BPC has been great, I really like how the courses are structured and the huge amount of material available that doesn’t leave anything uncovered,” he says.

In his spare time, Mongelli likes to read non-fiction books and hiking to stay in touch with nature. As he continues blogging, Mongelli has more ideas he’s going to implement soon.

“For me poker is just one of the many tools I have to keep myself motivated to work hard and sharpen my mind,” he says. “I hope that by reading my blog people will realize that what people usually define as success, in reality is just simple discipline.”

For João Dianda, blogging is a way to journal his progress and a key part of his learning. He writes about results after each day of play, and also his Uhlvar studies  and sometimes his studies on a certain subject or hand. For this full-time poker grinder, blogging is all part of the learning process.

“Currently my routine is totally geared towards the grind and study of poker,” he says. “This routine includes study time, coaching, grinding, and rest and exercise including swimming and walking.”

What sets your blog apart? Dianda says it’s his daily reports after each playing day along with some studies of Equilab, Flopzilla, and certain hands. It also works as a record of his performance.

“I can always check my progress,” he says. “I always get inspired by it. When I see it from the beginning so far, I can see the periods of difficulty and the good periods and see my graph and bankroll always rising, slowly, but it is.”

Dianda has been playing poker professionally for 10 years. He started with Sit and Gos, then migrated to the multi-table tournaments. He did well and then joined a Brazilian poker, where he had a $97,000 score. He would eventually go back solo and signed up for some online poker schools to improve. 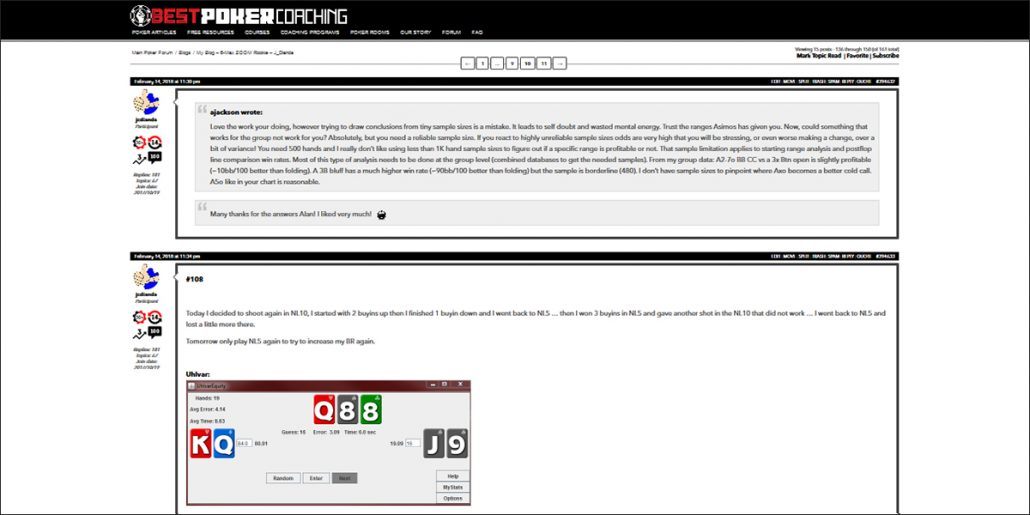 “I already knew about BPC, already subscribed to the YouTube channel, and watched all the videos,” he says. “What helped me a lot were the coaching sessions, which we have five times a week. Gradually I was correcting my main leaks and consolidating a good foundation and fundamentals of the game.

A fan of strategy games, Dianda also likes to play chess and played professionally and taught the game before taking up poker.

After looking at some other blogs, he has features to add after reading other blogs: a little longer posts, his feelings about the grind that day, emotions and GIFs, and video or music at the end of the post.

“After this contest and seeing that about 3,000 people have already visited my blog, I also decided that I will use my blog to entertain readers and not just inform coldly as I have been doing.”

What sets Richard’s blog apart? Brutal Honesty, he says – and bit of humor. He takes an interesting angle when producing his daily content.

“I write it to my future self and he does like a giggle,” he says. “Also, you have a record of your progress and can see you improvements. I encourage others to do it because it keeps you on track. If I don’t update it I feel like I am slipping away from BPC and doing my own thing – so it is important.”

“I blog about stupid stuff I am thinking about – life Philosophy and poker, sometimes it’s just a load of results, sometimes it’s about something bothering me that I want to write out and deal with that way,” he says. “Truth be told I have some Issues and I would like to prove that better poker can make you in control again of your destiny. I don’t have to be a person with mental health issues, but a brilliant poker player and being an eccentric European nomad is my end goal.”

As a kid, Richard started playing poker for cigarettes in his younger days– Pot Limit Omaha with red 2s wild “as a way to pass boring evenings in a boring town.”

Then the movie Rounders came out and inspired him and a few friends to start playing casino tournaments followed by mixed cash games. Wins and cash would come and go through the years and then he decided to become more serious about the game.

“I joined BPC with the idea to relearn No Limit Hold’em again as I want this to be my second career/retirement plan,” he says. “Since joining BPC my progress has been up and down, but there’s been many other improvements as the courses teach you other real life skills too. I think I can see the light at the end of the tunnel but its hard work to get there. It’s amazing how much I have learned when I look back to what I used to think I knew.”

When not playing, Richard loves techno music and watching cosmology and physics lectures. Richartd says he tends to paint a rosy picture in his blog, but it is only 92 percent honest. He hides some doubts and fears, but says he touches on “the more crazier stuff” in hopes it could help others.

“A lot of poker people have similar issues,” he says. “Maybe my gift back to the BPC community could be me sharing how I deal with things like gambling addiction,  agoraphobia, depression, and bipolar disorders – especially in this world where we are all on the ‘spectrum’ somewhere.” 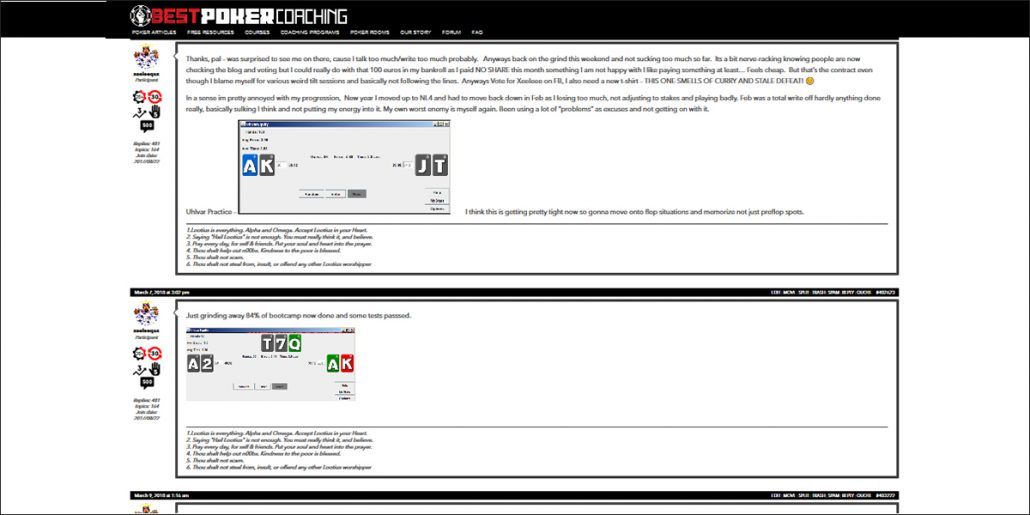 Currently he is unemployed and facing some debts after a failed business and some mental health issues.

“I am using my time off work to improve my mental health and relearn a skill which will mean I will no longer be a burden to any state,” he says. “If anyone who reads this is in a similar situation to myself and thinks they can do the course, feel free to say hello and I can give any advice they need about how to deal with certain issues. The world is changing and I think it’s a wonderful career opportunity for anyone to be a futuristic person earning 100 percent of what they need and more from online gaming.

“You too can be a pioneer for a very small start. All you need is time, a small bankroll, and that stubborn attitude that you will not give up to get where you want to really be.”