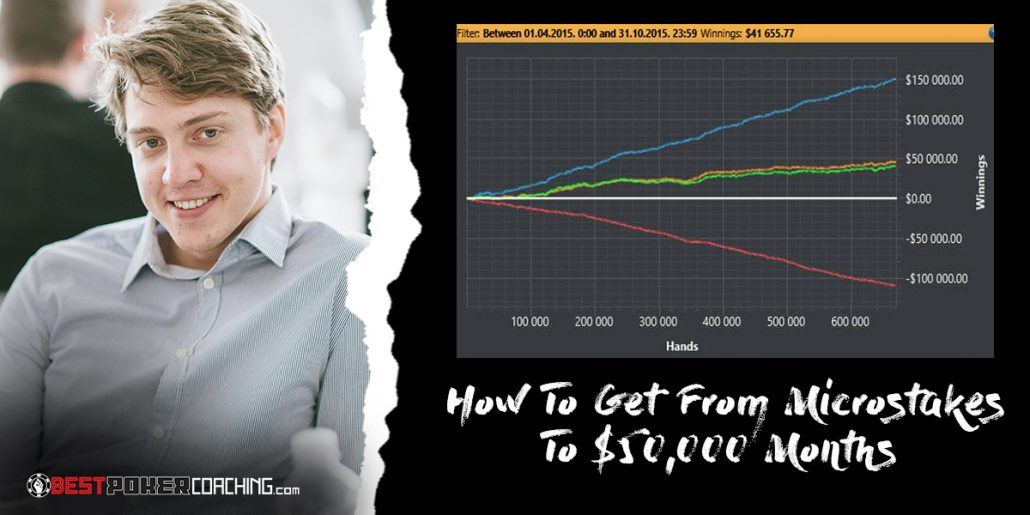 Meet Atvars, a BPC Hall of Famer and Coaching for Profits (CFP) legend. The Latvia native joined CFP in 2013 as a 24-year old self-proclaimed spew monkey.

After 4 long years of going nowhere at small stakes 6-max NL he finally came to the realization that he needed some extra help to achieve his dream of playing poker professionally. He initially sought out one-on-one coaching from Gordon, founder of BPC, and eventually came on board as a CFP student, signing a €60k contract.

Upon joining CFP, he anticipated a big learning curve and prepared himself for tough times ahead but still desperate to become the best.

I may experience some harder times, and that’s fine. The more I fall, the more I’ll learn how to stand up again.”

You can read all about Atvars’ struggles and triumphs on his 2+2 blog titled The Best I’ve Got. He also has a blog on BestPokerCoaching.com which you can read here. It’s rarely a dull moment on the poker tables and you’ll find that to be true when reading through his blogs.

If you want to know what it’s like to be a CFP student and what it takes to be a crusher, you should definitely check them out. 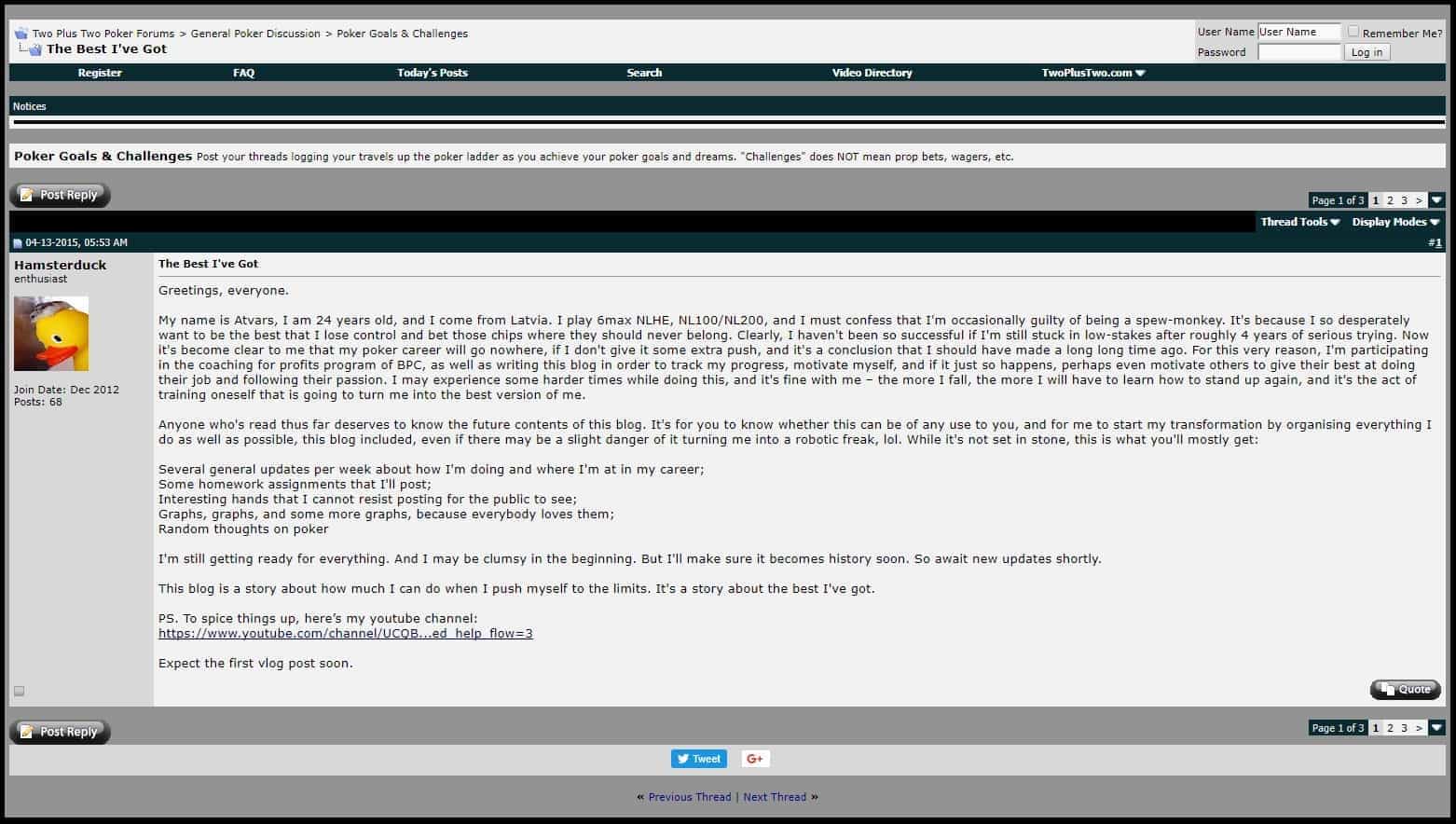 From day one, Atvars set out to work his ass off by studying and playing for long periods of time. He gave himself a one year deadline to complete the €60k contract.

The deadline he set for himself would mean very little free time for the duration of the challenge, but was quick to admit that “you gotta work hard if you want to make it”. But to achieve big things it takes sacrifice and Atvars was willing to do just that.

His first month in CFP was up and down but through hard work and relentless determination, he managed to pull out of the negative profit zone and eventually experienced his biggest winning day ever, finishing the day up $2,092.61.

Still, Atvars was barely able to break even on the month, even after rakeback. But he wouldn’t let an average month define him.

At least the month rocks in terms of how much I’ve learned and how much I’ve progressed, not only as a player but also as a person”.

Atvars carried this attitude into the following months ahead while grinding out some sick volume along the way. As the summer went on, he’d experience big downswings and stop-losses followed by even bigger upswings. He was turning a profit and learning a ton but most of all he was working his ass off.

It’s crazy to look back at myself just 2 months ago before CFP and to understand how doomed my poker future would likely have been, had I not joined the program. I was so often playing randomly with unjustifiable excuses in so many spots.”

I’m sure you’ve heard the term “hard work pays off”. Well BPC showed him the path and Atvars crushed it with a 10-ton hammer. In just 5 months and 24 days, Atvars completed the €60k contract – over 6 months ahead of his 1-year deadline – and still a CFP record for fastest €60k finish.

Atvars finished the €60k contract in just 5 days, 24 months (left). On the right, Atvars is congratulated by Gordon at the BPC seminar in Dubrovnik.

HOW IT ALL STARTED

Before, Atvars averaged around $2.5k per month. After CFP, simple math tells us that his average was higher than €10k. Considering this was a learning period for Atvars, these numbers are astonishing.

The truth is, however, that he probably could have finished even faster than the 5 month, 24 day record, if it weren’t for an agreement between him and Gordon towards the end to focus on some detailed quality work instead of him grinding himself to death.

Gordon explains how it all started.

In March 2015, Gordon get an email from Skrill that somebody sent 2500 Euro for five 1-hour coaching sessions. He tells his assistant that he doesn’t have time for that and that they should issue him a refund. They even told him that directly.

So Gordon emails him, they talk, and he definitely seemed committed and wanted coaching at any price.

Now many people in the past have given Gordon the “I’ll do anything” speech, but then often it’s an empty promise. So, naturally he was skeptical.

Gordon was super busy at that time, but he was always willing to help those who would kill for success. It’s because of his own trauma, as he wished there was somebody like that for him when he started playing poker – but there wasn’t.

That’s the emotional part, but there is also always the business part. Today, BPC can accept anybody into Coaching for Profits, but back then it wasn’t possible. So Atvars needed to test his commitment, so Gordon asked him to make a HUGE security deposit (a LOT bigger than the normal we ask for), which would be non-refundable.

Some people on 2+2 or Pokerstrategy who like to think of themselves as “smart and critical” would have never accepted this. And that’s why Atvars is today where he is and they are where they are, living their boring lives of mediocrity.

Skeptics always assume they are wrong. Winners know that they could be wrong, but they do it anyways. Because if you aim for Mars and fall, you’re still among STARS.” – Gordon

Neither Atvars or Gordon are religious, but they both had FAITH (he probably wouldn’t use that word) because the odds are never in your favor when you achieve greater than usual things.

Atvars never actually won the CFP monthly profit leaderboard! There was always someone else who binked a larger month at the right time. 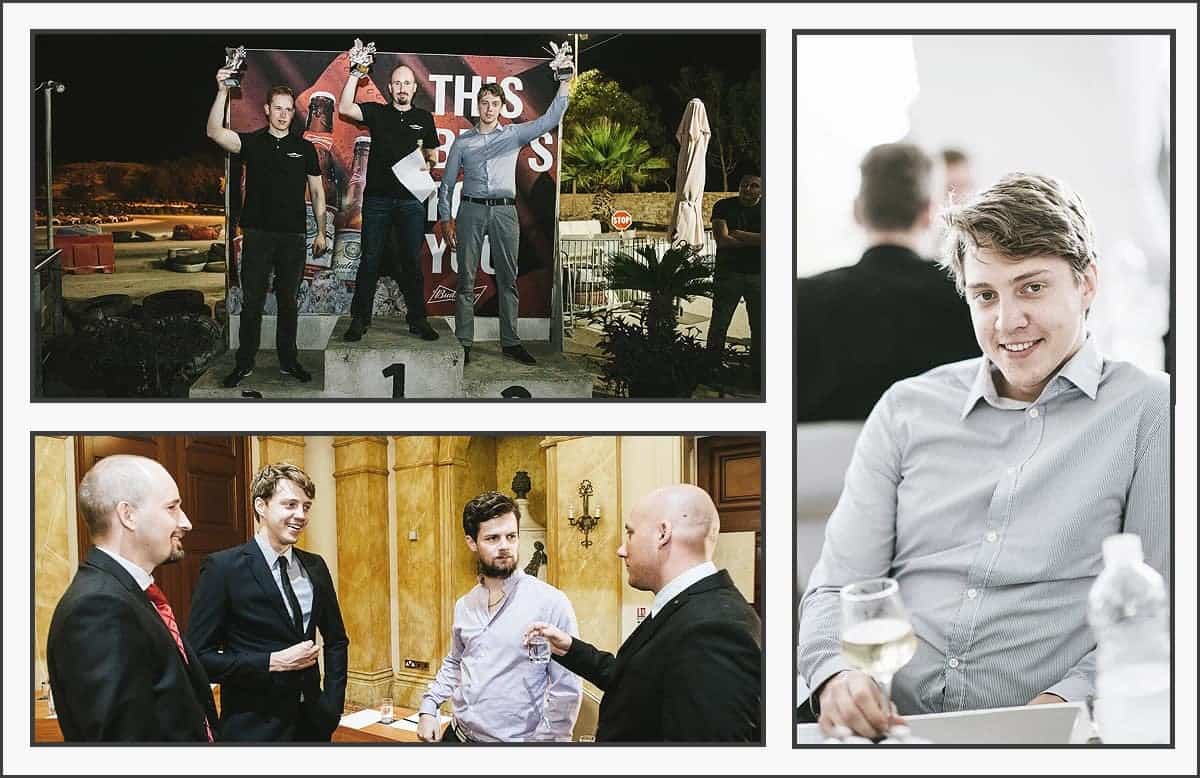 Atvars has been a big part of the BPC community, from Go Kart racing to the poker seminars in Dubrovnik and Malta.

THE BEST DECISION I’VE EVER MADE

Before joining CFP, Atvars was a break even to slightly winning poker player but admits to not really understanding why he has winning. That made it really hard to figure out what was right and was what wrong.

Were upswings the results of good play or good luck? Were downswings all about bad luck or simply bad play? It was hard for him to know until he joined Coaching for Profits.

I’ve gotten so much better that I can see my mistakes now so clearly that it’s embarrassing. It’s the best feeling you can have because you know for sure that you’re improving”.

As with most people, Atvars was playing poker with no training at all. “I was going nowhere and made no progress, none whatsoever,” he said an interview at the BPC seminar in Dubrovnik. “There are people out there [BPC] that can help you, there are people who have made it themselves, and they can tell you if you’re doing the right thing or not. And that’s helped me more than anything.”

Atvars praised Gordon and other coaches at BPC for their coaching methods and getting through to him in a way that helped him learn the most. Watch the full interview with Atvars below. 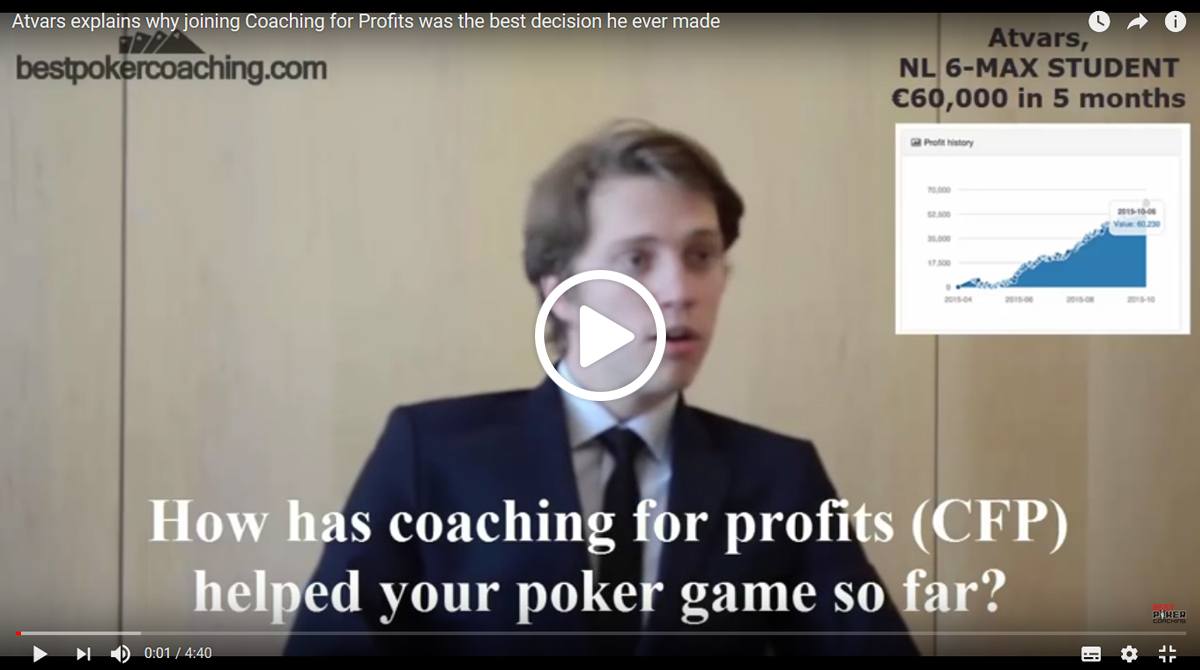 Atvars also sat down with us at the BPC Seminar in Malta. Here he talks about his life before and after BPC and how it’s changed, why he’s a better version of himself now versus before, and what he plans to do with the money he made while in the CFP program. 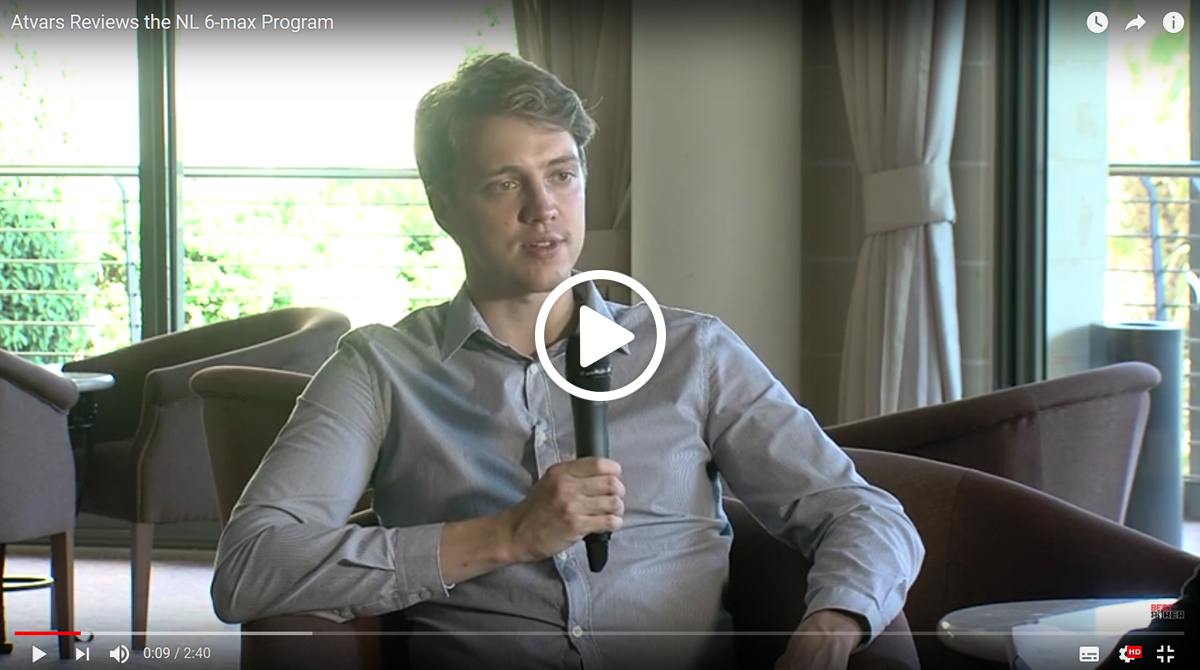 In the beginning, Atvars was far from a poker prodigy, as some may believe. But from watching his 50-minute presentation at the BPC poker seminar in Malta, you’ll soon learn that he’d be the first to admit that he’s just an ordinary guy with a passion for the game.

“What one man can do, another can do; if it’s been done, it can be repeated,” said Atvars. What separates him from the dreamers of the poker world however is his work ethic and desire to succeed.

Throughout the lecture, Atvars presents some ideas and tips that will make you think about things that you probably haven’t given much thought about before. He also explains his struggles, which are pretty common for most players, and how he was able to overcome them.

Furthermore, Atvars talks about what helped make him become successful and how it can work for you.

His top 3 tips for poker success are as follows:

#1 – Have a real and meaningful goal. This helps you look at poker more seriously, increases your ability for cognitive thinking and serves a source of unlimited motivation.

#2 – Take poker coaching seriously. Do not waste a single second and be 1000% prepared for every session. Ask many questions, but ask the right questions.

#3 – Strive for perfection. Every day, you should be working hard to identify and eliminate every single leak while looking for every single opportunity to exploit your opponents.

He ends the presentation with his thoughts on a few hands, noting the typical mistakes inexperienced players often make while stressing the importance of eliminating these mistakes. It’s really good stuff.

I highly recommend watching the entire lecture while taking notes along the way. Even if you never play another hand of poker, there are life lessons to be learned here.

Today, Atvars is still at it, crushing the tables and living the dream. The guy made nearly $50k recently in just one month!

Think you can be the next Atvars? Well, good news! Not only are records meant to be broken, you can challenge the record completely risk-free! Join Coaching for Profits today and who knows, maybe YOU will be the next BPC Hall of Famer!

Take it from Atvars. “Unless you’re ready to settle for mediocrity, joining CFP is a no-brainer. It was the best decision of my life”. 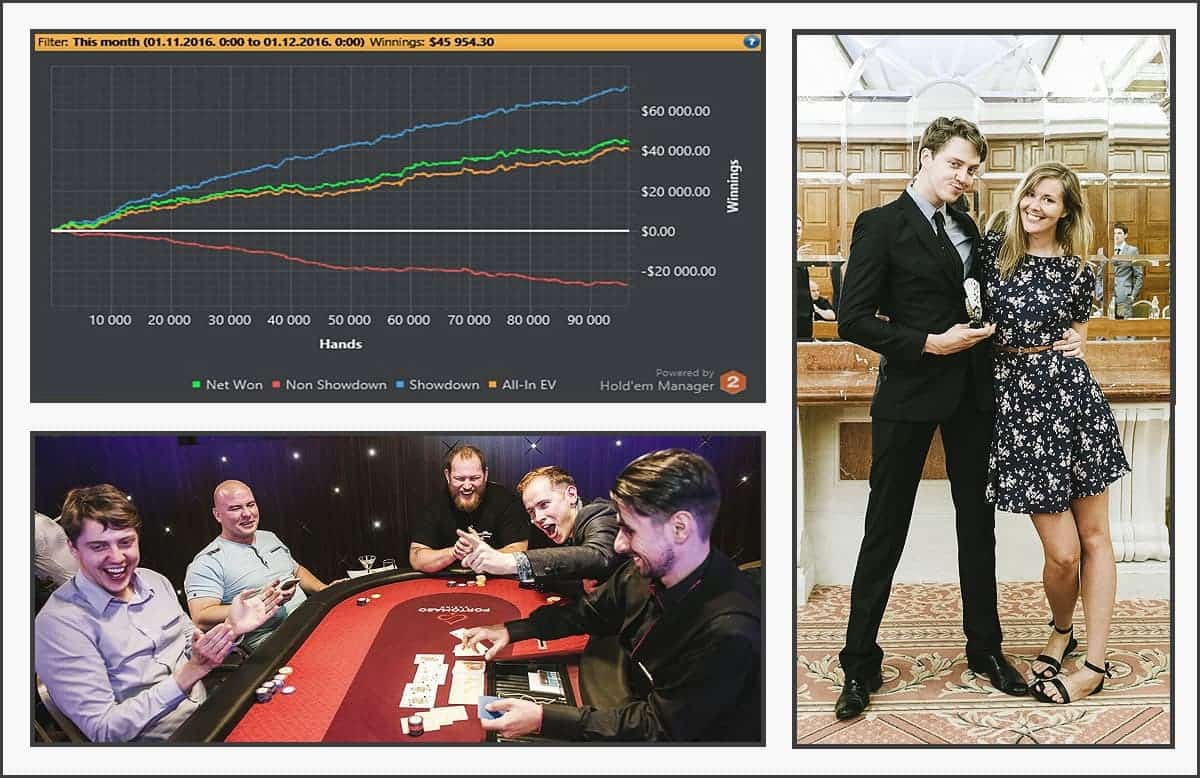 Atvars is enjoying life after BPC and still crushing at the tables (see $50k graph above). 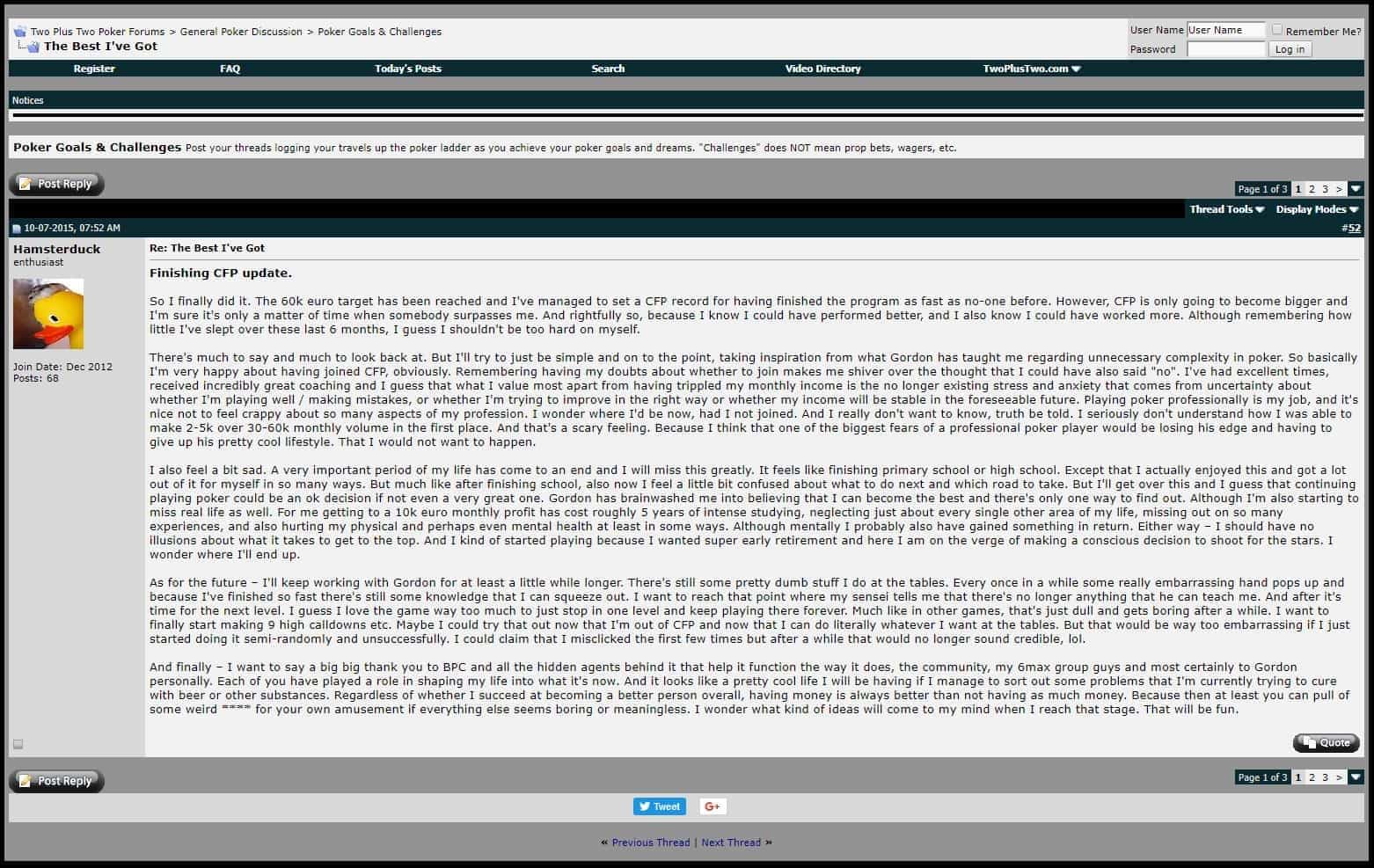