Alessio case study: From a small dream to a bigger reality 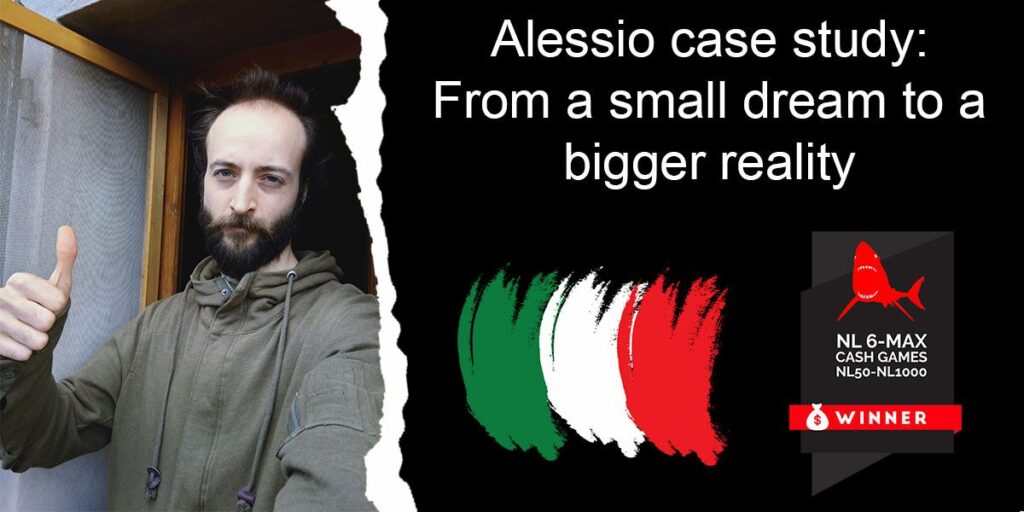 Alessio joined the program at the end of March 2017, playing in the beginning at NL10 to adjust to all the new material he was getting as a new NL 6-max Crusher Coaching for Profits student.

And the new strategy was working out fine for him, in the first two months in the program he had already won approximately €1.000 and then €2.500 in the second one, moving from NL10 to NL50.

At this time he was mainly playing on Poker Stars Italy and getting a good rakeback deal from their site. All that changed in June when they changed the system and Alessio went from receiving 30% rakeback to only 3%. He still played there for nearly 1.5 months, but he realized getting this ridiculous rackback is not good and moved to a different site.

In the following 3 months, his hours dropped significantly, he went from playing 150-200 hours to play 40-100 hours per month.

It was at this point when we started doing check-up sessions with the students to see how they are performing and check if they are having any problems or questions so they can improve faster.

Besides writing articles about CFP students that finished their contracts, I’m also the VIP Coach for BPC and my job was to do the check-up sessions with the students.

I wish I could say I remember all the students I talk to, but I don’t want to fool you. I do remember Alessio, though.

The first check-up session we had was after the month he played fewer hours and the first month on red (losing) since he started his Coaching for Profits journey. What I remember the most from the session was me asking him what it was the goal with poker and him answering: “I want to play NL200 to start making €5.000”. And you’ll see he learned to earn even more than that!

At the end of 2017, coach Asimos became the head coach in the NL 6-max program and he created an Elite group to pick the best students to start working with him closely. Due to Alessio’s low hours, he didn’t join at first, but in December 2017 he was invited to join the group, with the condition to increase his playing hours.

And he did improve the hours, in December he played 166 hours. The results in both December and January weren’t all that great, but February was a very nice month for Alessio. He earned €11.446 and managed to move up from NL200 to NL500 and at the end of the month he took some shots at NL1000.

In the video below Alessio talks about what it takes for you to make €10.000 in a month:

April was a bad month and Alessio finished losing even after playing 197 hours. In the following months, his hours slowly decreased. When asked about the reason for this he replied:

“I keep going through this cycles where I put a lot of volume and times where I’m reluctant to play. It has been like this even before joining the Coaching for Profits program”.

In August, Alessio came back strong to the tables, he earned €10.400, followed by his record month in September (€14.151). October he had an ok month winning €5426 and he ended up finishing the contract at the beginning of November completing his €60.000 contract in 1 year and 7 months.

Like mentioned earlier, Asimos was his main coach while he was in the program. This is what he said about Alessio:

“One thing to say about Alessio is his spectacular mentality. I don’t remember he ever complaining or bringing up any drama. During the coaching sessions, he always saw everything with a cold eye to use the information to improve.

He was a silent power, always becoming better every month despite dealing with the variance at the tables, he was always optimistic and positive.

I believe his game improved the most when he improved his HU and 3-4 handed game on top of the 6-max skills. Learning to play versus fewer opponents is very important when you’re playing higher stakes since the tables are often not full”.

About his experience being a BPC student Alessio said: “It (BPC) made me focus on the right things and gave me a good supportive community which is very much needed in this harsh game.”

After Coaching for Profits

It has been only 2 months since Alessio finished his contract, and there is already a lot of things going on in his life. He is mainly studying on his own and he is planning on start studying with some friends, he is just not sure yet if it’s going to be online or in real life.

He is playing the same stakes he was playing when he finished the program, NL500 and NL1000, sometimes he also plays NL200. Unfortunately for him, this is the highest he can play, since NL1000 is the highest stake you can play in Italian sites, to play higher he’d need to move to another country. Even with that restriction, he managed to break his record month in December earning €24.000 at the tables.

On top of that, he started coaching for BPC. Now he is helping the students playing in the same sites as he is to move in stakes and start getting these nice €10.000+ months.

Alessio is planning on going to Vegas later this year, the fishes there will need to watch out for their money! Congratulations Alessio!