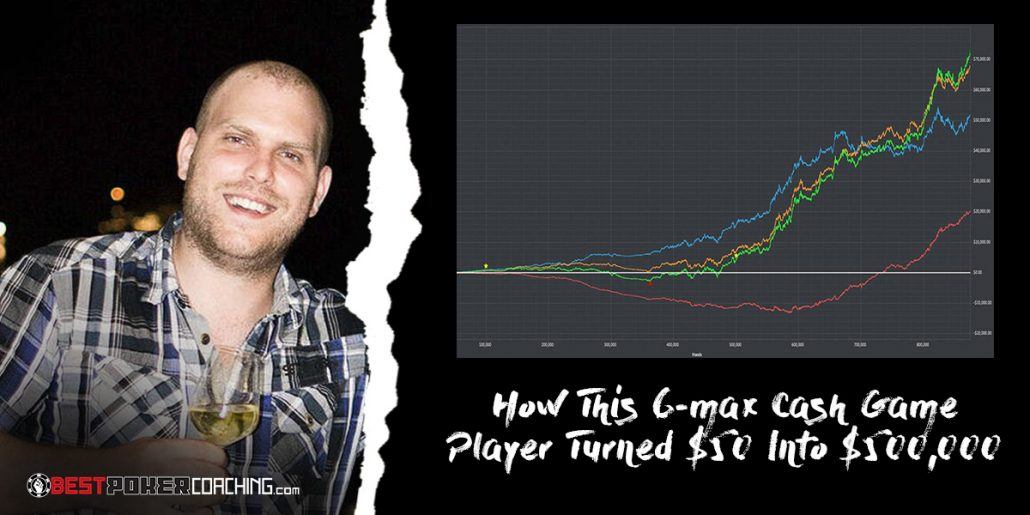 Sascha aka HansTheGreat is a true inspiration for not only the BPC community, but for every poker player in the world who wants to achieve greatness. In just 9 months as a Coaching for Profits (CFP) student, he turned a $50 starting bankroll into $100,000, and eventually $500,000.

He started at the very bottom and worked his way up through the stakes. This is his story.

BEFORE COACHING FOR PROFITS

Hans had limited success prior to joining CFP but had no real net worth. Like many others, he tried many of the counterproductive “advanced” methods you can find on the Internet.

You know what I’m talking about. Forums, training sites, videos, books… you have probably tried many of them yourself.

And if you’re like Hans and 99% of the other poker players out there, they also didn’t work for you. That’s not to say these strategies are worthless but a lot of it is designed to teach you how to avoid losing money.

But that’s not what Hans wanted. He wanted to win.

So he got fed up with all this and joined what he considered to be clearly the best poker community out there.

As an early member of the BPC community, he started to improve a lot through the courses, but was still not making money consistently. 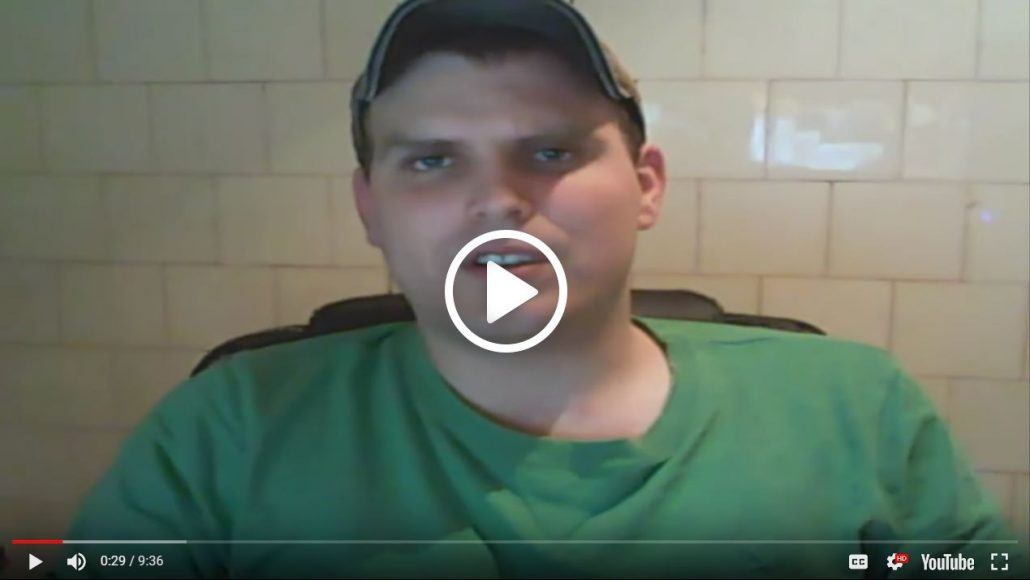 Hans joined CFP in 2013 as a 23-year-old IT student from Croatia. But even though he was closing in on a Bachelor’s Degree, he couldn’t see himself as an ordinary working man. He wanted something more.

“I believe that I can live my life in a way that I want and I don’t like the idea of living [an ordinary] life like most people do,” wrote Hans in a 2+2 post. “I saw poker as a chance to earn starting capital for the future and to gain some experience of working in a one-man company.”

Hans e also wanted to challenge himself, so he agreed to a $100k hardcore contract with just a $50 starting bankroll. He started at NL2 6-max and began documenting his journey every step of the way.

You can read his fascinating story in every detail on his 2+2 blog titled Watch how I turn $50 into $100,000 without using advanced strategies.

He also has a detailed blog on BPC, which you can read here as well. 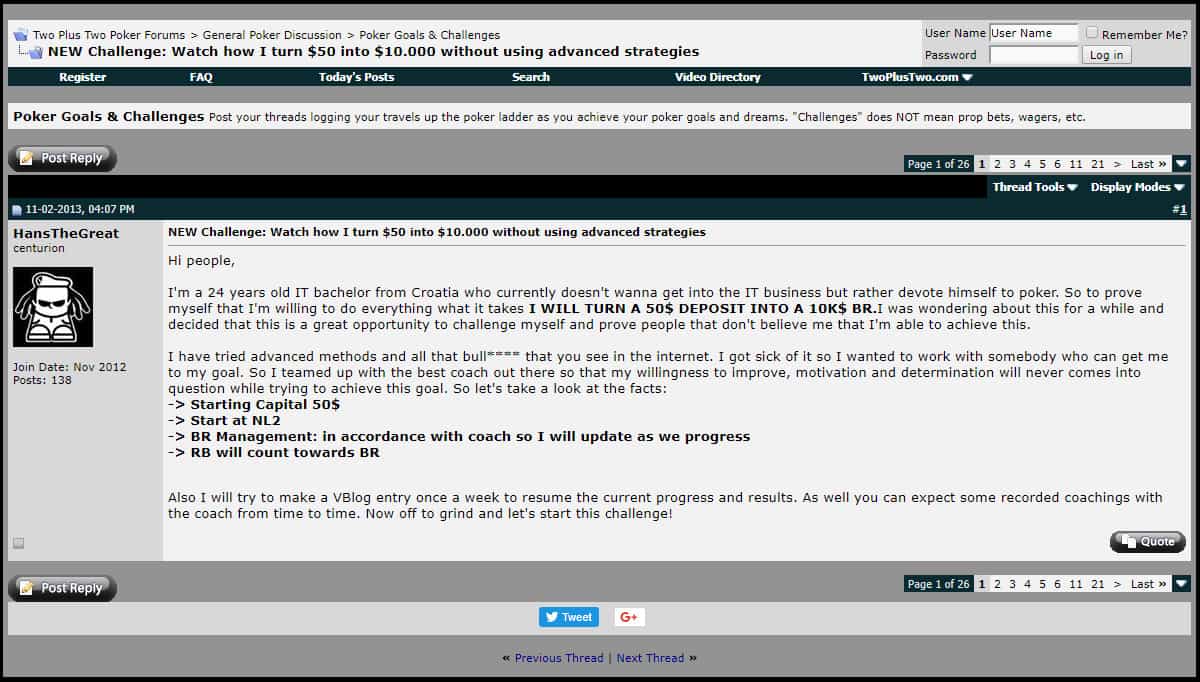 BE CAREFUL WHO YOU LISTEN TO

Not every community is as helpful and positive like BPC and it didn’t take long until somebody had a great piece of “advice” (see the screenshot below).

The worst part is that most people would deep down agree with him and think he is “realistic” and “reasonable”.

What I want you to understand is that there are LOT of guys like this on forums. This guy had more than 300 posts, was a member of 2+2 for almost 4 years and talks like a parent giving real world “advice”. Check out out:

Forums are for entertainment, so be very careful who you listen to.

I cannot tell you how important it is to NOT listen to advice on forums unless you know the poster is very successful.

It is typically the hobby of wannabe poker pros to spread their passive-aggressive advice on forums. To many, however, their advice may seem reasonable to a degree because let’s face it, most people suck and will never achieve much of anything.

So if you want different results than the donks, you need to be different! One of the first things Gordon said to Hans is that he can not listen to what the idiots on the forums will say.

To make money in poker, you can’t listen to propaganda of the losers who never made any real money in their life.

CLIMBING THROUGH THE STAKES

Hans shook off the haters and embraced all those who supported him as he continued his climb through the stakes. He experienced some ups and downs, especially in the beginning where he experienced a horrendous downswing, but he kept grinding and working on his game.

After a few months and a lot of struggles, which you can read about in his blog (and I highly recommend you do), Hans experienced a record month of $28k in profits!

Keep in mind that Hans started with just $50 playing at the lowest limits playing NL2!

HansTheGreat wins $28k in one month!

Not long after, Hans finished the $100,000 challenge. And it took him just under 9 months with an initial investment of only $50.

Below is his graph over the entire 9 months where he made $72k directly on the table and another $28k through bonuses and rakeback. 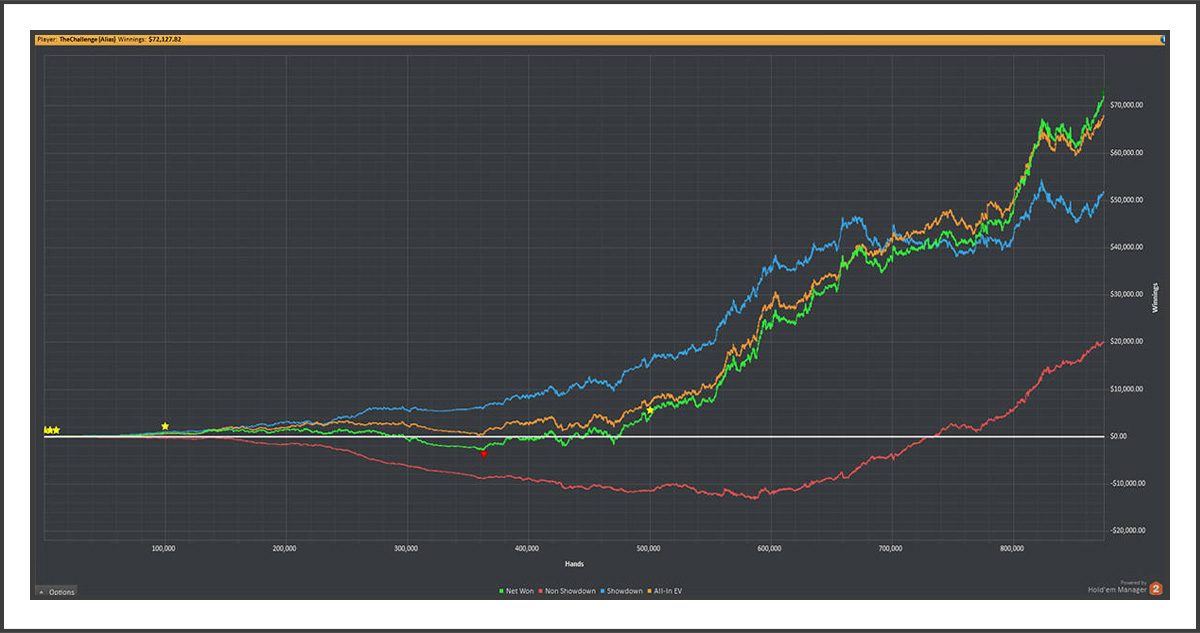 It’s important to know however that Hans made the majority of his winnings once he fully understood AND applied everything his coach (Gordon) had taught him.

Of course it helped that he played high volume (around 875k hands during the challenge) and played nearly 1400 hours of poker. But as you can see, Hans did not make serious profits for almost 400k hands!

The point is, most people would have given up after 400k hands. Man actually have. But here at BPC, we are DIFFERENT. The coaches as well as the community of students provide complete support from day one.

There is a reason why you don’t see publicly documented success stories anywhere else. It takes a lot of dedication and absolute perseverance to never give up.

Another reason why students document their progress publicly on blogs is because if we just told the world the results without proof, nobody would believe it’s real.

“I honestly think it was an extremely good run accompanied with some dedicated work and self awareness,” said Hans.

By self awareness, Hans meant that he never played in games too long where he didn’t see an edge.

It wasn’t extreme “bumhunting” or anything, but he was very strict in his table selection process, even towards the end where he encountered more regs.

Hans continued, “In the big picture, I didn’t become the perfect poker player but rather someone who learned how to make money at this game.”

And making money was exactly what Hans wanted in the first place. But as he got deeper into the challenge, he realized he was just as interested in becoming an awesome poker player. 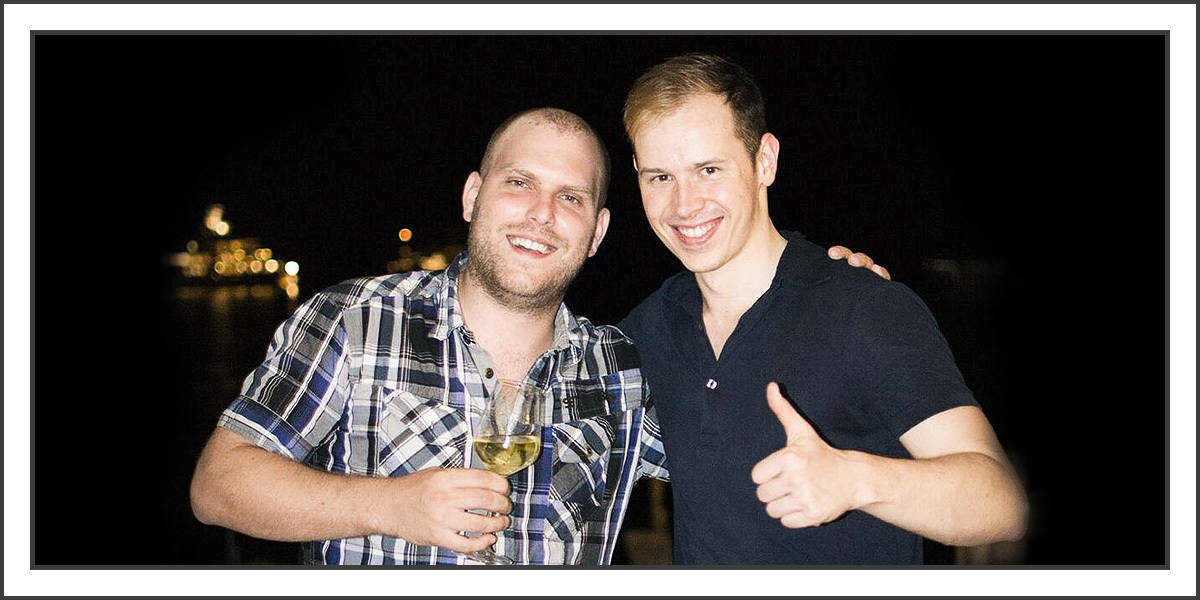 Not long after completing the $100k challenge, Hans took some time to answer some questions for the community during an AMA (ask me anything) webinar. It’s a 90-minute video, and you’re free to watch it init’s entirety, but here’s a recap of what went down.

To kick things off, Hans talks about his journey where turned $50 into $100k and in more detail than ever before.

He begins talking about how he had trouble with the No Bullshit 6-Max book and speaks about an email he sent Gordon where he complained about some of the material. He was especially angry when his first shot at NL10 failed in which he was pretty pissed off with book in general.

But it didn’t take long for things to click and Hans went from NL2 to NL50 relatively quickly and oddly enough he was actually pretty happy with the book. Then he got hit with a horrendous downswing where he was around -60 buy-ins below EV, and he explains his frustrations while digging himself out of it.

Up until that point, Hans was mostly playing speed tables on the iPoker Network. But he decided to switch it up and move to the regular tables once he reached NL50 again. This is where he learned when to start deviating from the No Bullshit 6-max book and also where he really started to grow as a poker player.

After several failed shots at NL100, he finally found success and this is where things really started to take off during the $100k challenge. That’s right, even HansTheGreat struggled. But he didn’t quit. Instead, he persevered and grinded through it.

Next, Hans moves on to the question: What would I do differently if here to start all over again?

And the short answer was, not much. But he does provide some tips for those looking to follow in his footsteps with the $100k challenge.

He suggests that you choose normal over fast tables, simply because you’re able to game select and play with the worst players. Also look for the best poker rooms when at the micro stakes – ones with good reg to fish ratios and solid rakeback percentage.

Then once you get to NL100 and above, you should start table selecting across multiple networks to find the best games. This is because there are more regs once you reach these levels and your edge will be smaller unless you actively find the fish.

Furthermore, Hans says to not set monetary goals in the short term. It’s perfectly acceptable to have an end goal like the $100k challenge but to set a goal for making $10k one month is not the way to go. Instead, set up quantifiable goals such as volume, study hours, daily tasks, etc.

Later on, Hans goes into detail about mindset, how much it matters, and why it’s important. “We don’t define ourselves on the good days but rather on the really bad ones,” Hans said. “Determination, hard work and discipline is what brings you more money in today’s games.”

His mindset advice for micro stakes players is to create discipline anyway you can. Then as you move up, it becomes super important to cut out tilt and learn to get rid of any negative emotions. “Learning to quit is essential,” Hans said.

The next chapter in the webinar has Gordon’s perspective on the $100k challenge and goes into great detail about several topics. And then later on, Hans answers several questions from those attending the webinar.

BPC IS GOING TO TEACH YOU HOW TO MAKE MONEY

Here is Hans talking about his time in Coaching for Profits at the BPC poker seminar in Dubrovnik. He credits the coaches for constant motivation and how to approach certain things and is especially thankful for his time with Gordon.

“Having Gordon as a coach was a big breakthrough for me. He didn’t teach me crazy or fancy lines, he just told me how to make money,” Hans said. He also credits the BPC community for how supportive they are as a whole and how much it helped him improve and to never give up when times got tough.

LIFE AFTER COACHING FOR PROFITS

Upon finishing the $100k challenge, Hans’ next goal was to make $250k and beyond as he continued to update his blog on the 2+2 forums.

He also continued to study and improve on his own, keeping 100% of all profits, where he’s made over $500k to date! Check out this graph!

HansTheGreat Celebrates Over $500k in Winnings

Hans also created his first poker course titled How to Crush Fish, which is still one of the most popular courses sold here at BPC and worth every penny.

Today, Hans is realizing his dream of traveling around the world and of course he still an essential part of the the community as well as a BPC Hall of Famer. 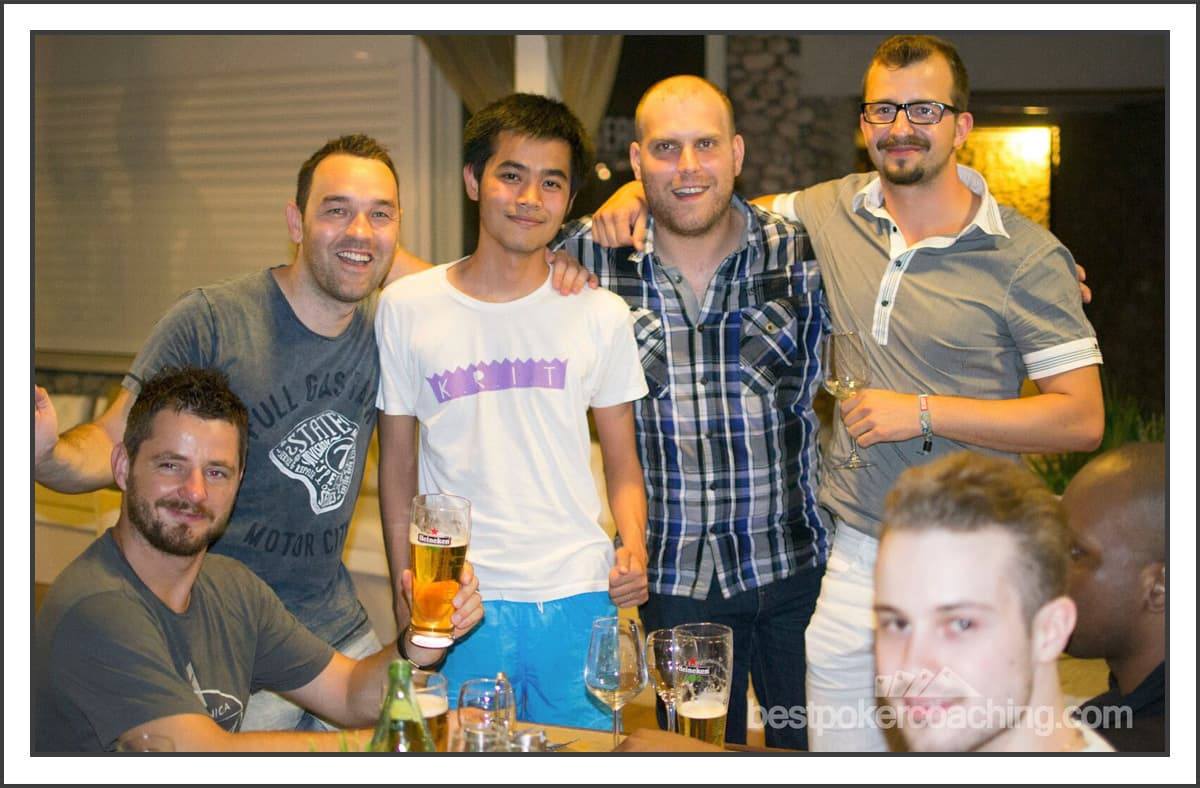 HansTheGreat celebrating with members of the BPC community

Are you overestimating your hand strength?
Scroll to top