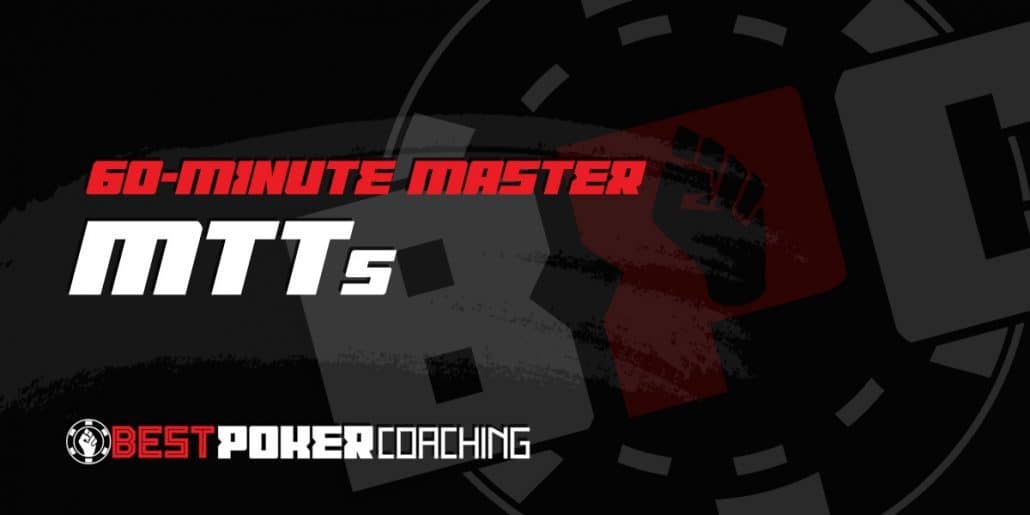 Starting hands are one of the easiest and fundamental concepts to learn in MTTs. This lesson will explain which starting hands you should play from early position to the button, as well as certain adjustments to make at different stages of the tournament.

Keep in mind that starting hand charts will vary. The important thing to remember, however, is to understand the logic behind them and to follow them religiously until you know how and when to deviate.

The most important factor that determines our starting hand is our position at the table. The hand ranges you’ll find below are very tight and conservative but are highly recommended for the early stages, especially for beginners.

You should raise these hands if no one else has previously opened the pot. If someone already raised, a good rule of thumb is that you will need a hand from an earlier position in order to call. Obviously, there are plenty of factors that can have us deviating from this rule, but it will surely keep you out of trouble while you develop your game and gather reads on your opponents.

The above hand ranges are loosely based on Harrington on Hold’em Vol 1 for a 10-handed full-ring table. Again, these ranges are a conservative approach so feel free to adjust according to your current skillset. As you become more comfortable with your postflop game, you can begin opening up your range slightly in each position. Later in this series, I’ll provide additional strategy for the early stages so you know when to open up your range and when not to.

The advantage to using a tight, conservative starting hand range is that it will keep you out of trouble much of the time. It generally avoids tough postflop situations by ensuring you had a better than your opponent preflop. It also gives you respect when you raise preflop.

Unfortunately, you can’t play this tight forever. As the tournament progresses, you’ll need to widen your starting hand selection. If you don’t adjust, the blinds will eat away at your stack. This is especially true if your table is shorthanded. In this case, playing middle position hands from early position become good hands to raise with.

Again, these starting hands are focused on a tight-aggressive (TAG) style. Loose-aggressive (LAG) players will be playing a much wider range of hands and will look to attack weak and timid players at any stage in the tournament. As your game develops, you will become more aware of situations where you can open up your range.

Later in this series, you will learn more about specific adjustments and strategy once you move past the early stages of an MTT, including bubble play, the final table and even heads up!

MOVING BEYOND THE BASICS

Ok, so this section will introduce you to some more advanced theory for playing starting hands preflop. This is where you will start learning how to play certain hands according to not just your position, but your opponents as well.

These are the best of the best – the top 5% of all poker hands. As a general rule, always raise these hands preflop and NEVER slow play. If you raise AK or QQ from early position and someone else re-raises, think about folding if the raise is substantial and especially if the re-raiser is tight. AA is always played for stacks preflop and KK is as well in most situations.

These hands typically require good implied odds, especially when calling preflop. You never want to commit more than 10% of your stack preflop. Rarely call a preflop raise with these hands because they are easily dominated and will have you on the rail well before the bubble. Instead, look to see cheap flops or raise in late position when no one else has entered the pot.

These are a step above absolute trash hands and should only be played in the right situation. At best, they are stealing hands where you prefer to take down the pot preflop. These hands are a big source of trouble due to their reverse implied odds, so be extra cautious postflop and never call a raise with these hands unless you have like 3BB left in your stack (more on that later on).

You should now have a solid understanding of which hands to play preflop in various situations from early position to late position at a full-ring table. If you’re playing at a 6-max table or the table is short-handed, adjust your starting hand requirements accordingly. In the next lesson, you will learn about playing from the blinds.